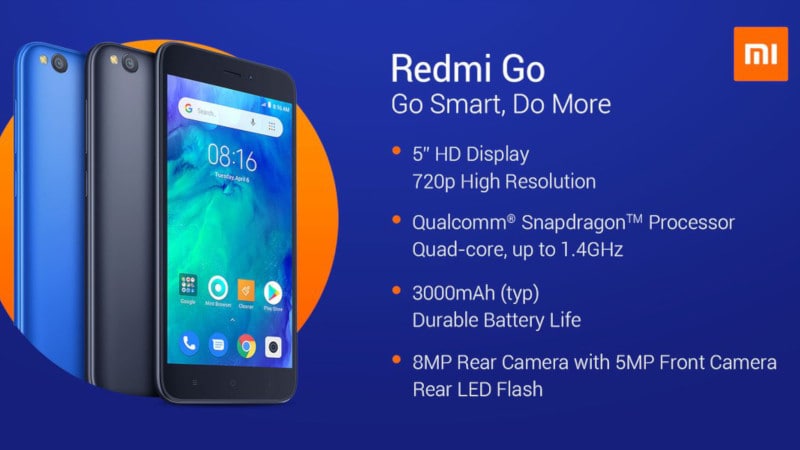 Xiaomi has today launched its first Android Go smartphone – Redmi Go in India. The smartphone is priced at4,499 and will be exclusively available in the country via Flipkart, Mi.com and Mi home stores starting March 22 at 12 P.M. The Xiaomi Redmi Go comes in Blue and Black colours. It comes with Rs 2200 cashback in the form of vouchers and 100GB data for Jio users.

Redmi Go smartphone features a 5-inch HD screen with 1280 x 720 pixel resolution, 16:9 aspect ratio, 296 PPI and 1000 contrast ratio. It is powered by the Qualcomm Snapdragon 425 quad-core processor backed by Adreno 308 GPU and paired with 1GB RAM. There is 8GB of internal storage, which can further be expanded up to 128GB with a microSD card slot. The phone does not feature security options like fingerprint sensor and face unlock.

It is backed up by 3,000mAh battery which the company claims to offer 10 days of standby time. Connectivity options for the phone will include dual-SIM support, 4G, Wi-Fi, Bluetooth 4.1, and a micro-USB port. Sensors on board include Light sensor, Proximity sensor, Accelerometer. The Redmi Go measures 140.4×70.1×8.35mm and weighs 137 grams.