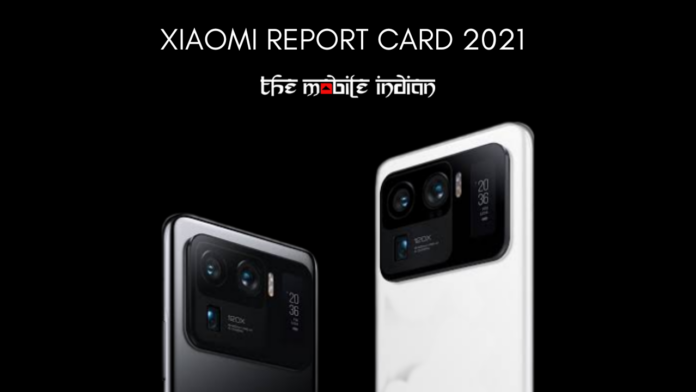 Xiaomi is one of the largest China-based smartphone manufacturers that not only holds a strong position in China but in India as well. Xiaomi and its Sub Brand Poco have one of the largest user bases in India. So how well did Xiaomi and Poco perform during 2021 and was it able to impress the consumers? Let’s find out in our Report Card 2021 series.

Xiaomi, Redmi and Poco have been working together to capture a wide range of Indian users and the major plus point they had in 2021 is in the way the brands diversified their portfolio. All three brands majorly operated in the budget segment previously but in 2021, all of them launched smartphones that cost above Rs 20,000, including Mi 11x series, Poco F3 GT, Redmi Note 10 series that making the segment even more competitive than before.

It was competitive not only for other brands but also amongst these three brands as well. Moreover, the brands also experimented and entered new spaces such as the gaming phone segment.

Xiaomi further has a loyal userbase in India that stays despite being a sentiment against Chinese brands. This is also beneficial for the brand in the long term as it’s still number 1 in India and might retain the position next year. Xiaomi also maintained continuity in launching phones with the help of its sub-brands by letting Poco launch smartphones within the time frame when Xiaomi isn’t launching any device.

As for the minus points, the fact that Xiaomi widely diversified its portfolio and Poco also did the same, some amount of confusion was created in the market as many devices were similar to each other and were being launched with very minor differences. We also felt that Xiaomi had an unclear communication strategy as to where it opposed launching 5G at the beginning of the year, it readied its 5G portfolio by the end of the year was started pushing 5G as the most thing.

Amongst the wide portfolio of smartphones, here are the top 3 smartphones of the year that we felt are worthy of being on the list:

Redmi Note 10 Pro, for its price, is a decent smartphone that comes with a 1080p full-HD+ AMOLED display that even has a 120Hz refresh rate. So even though it’s a bit on the pricier side, it’s a great overall smartphone.

With the Mi 11 Ultra, Xiaomi proved that it can create a true flagship device for everyone. The device was loaded with features and top-notch specs including a secondary display that was one of the unique characteristics of the smartphone.

The Poco X3 Pro, in our opinion, is not only the best value for money smartphone for Xiaomi but also one of the best offerings from Poco after Poco F1. The device gave flagship specifications for under Rs 20,000, including a Snapdragon 8-series processor, 120Hz display, big battery, and more.

And that was it for our Report Card for Xiaomi and Poco for 2021. The brands have entered into new segments, and the scenario will become even more interesting next year.