The Xiaomi Mi Max 3 will be backed up by 5,500mAh capacity with support for Quick Charge 3.0 to ensure fast charging. The predecessor Mi Max 2 came with the smaller 5,300mAh battery without support for fast charging.

Xiaomi is all set to launch its new smartphone under Mi Max series - Mi Max 3 on July 19 in China. Now ahead of the launch, the specifications of the Mi Max 3 have been officially confirmed by Xiaomi President Lin Bin on his Weibo handle. Yesterday also the CEO revealed the official renders of the smartphone showing various colour options like Blue, Black and Gold.

Lin Bin has claimed that it will come with an enhanced screen, battery, SoC and cameras as compared to its predecessor, Xiaomi Mi Max 2 which was launched in the year 2017. 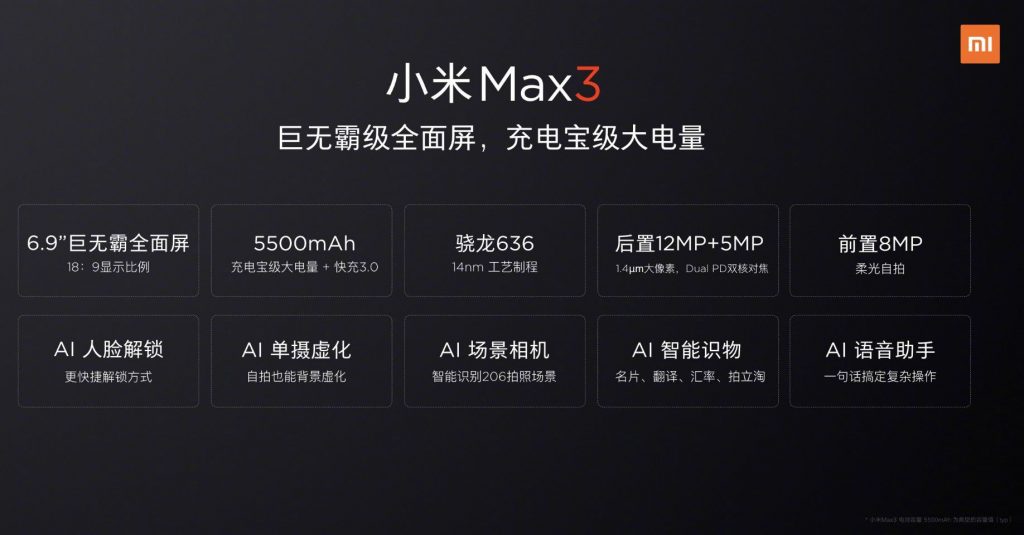 The Xiaomi Mi Max 3 will be backed up by 5,500mAh capacity with support for Quick Charge 3.0 to ensure fast charging. The predecessor Mi Max 2 came with the smaller 5,300mAh battery without support for fast charging.

Lin Bin has confirmed that the Mi Max 3 will be featuring dual camera setup with 12-megapixel and 5-megapixel sensors. The primary sensor will offer features like 1.4μm pixels and Dual Pixel autofocus. For the front, it will feature an 8-megapixel camera for selfies with a soft-light LED flash. It will be also featuring AI features such as AI facial recognition, bokeh effect, 206 scenes, face unlock and voice assistant. 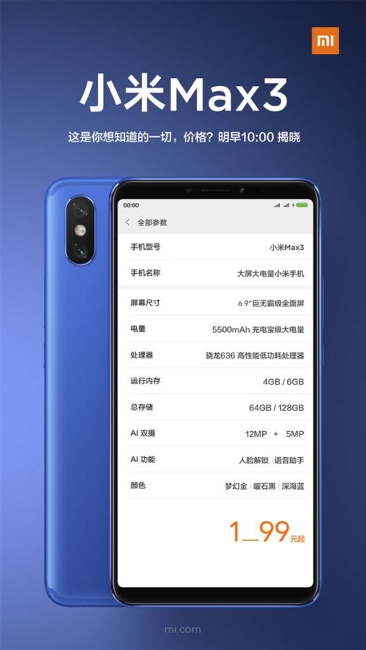 Apart from this, Xiaomi has also teased an image on its official Weibo account asking people to guess the pricing of Mi Max 3. The image has also confirmed that there will be two variants - 4GB RAM + 64GB storage and 6GB RAM + 128GB storage. It shows that the price may not exceed 1_99 Yuan. It hints that the premium variant of the phone may carry a price tag of 1,999 Yuan. However, nothing is confirmed yet about the pricing. We have to wait for tomorrow for the company to make an official announcement.