Xiaomi Mi 6 will indeed come with a flat variant with 5.2 inch full HD LCD display instead of OLED display with dual-curved edges.

Xiaomi has recently confirmed that the company will be skipping the Mobile World Congress MWC 2017 event this year and will not be launching Xiaomi Mi 6 there. The Xiaomi Mi 6 was earlier reported to come in two variants. As per the report, the standard variant will sport a flat display and will come with 4GB of RAM, while the premium variant will boast a curved display along with 6GB of RAM.

Now today, a user on Chinese microblogging website Weibo has posted that the Xiaomi Mi 6 will indeed come with a flat variant with 5.2 inches full HD LCD display instead of an OLED display with dual-curved edges. The user further on Weibo reveals that the Mi 6 will be powered by the latest Qualcomm Snapdragon 835 SoC. However, earlier reports have hinted at Mi 6 having it in-house Pinecone V970 SoC. Xiaomi could, however, use its in-house processor in the Xiaomi Mi 6s or Mi Note 3. 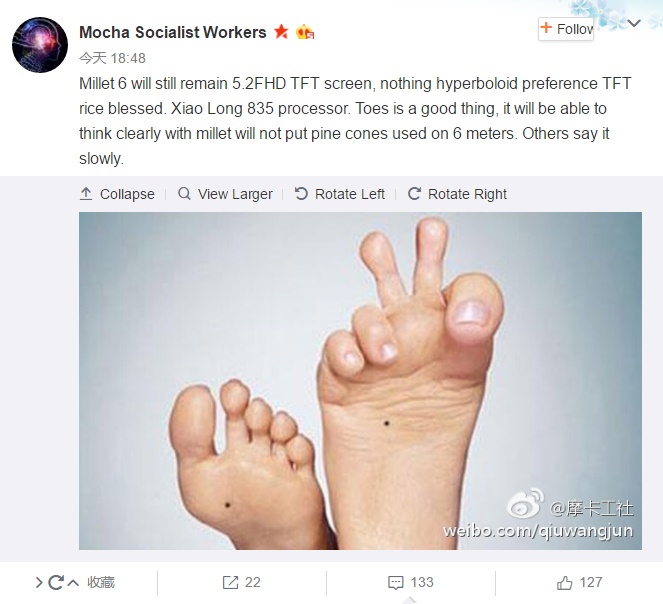 A recent report revealed that Xiaomi Mi 6 will arrive in three different variants with different chipsets. The first variant will be equipped with Helio X30 SoC and will carry a price tag of about 1,999 Yuan which is approximately Rs 19,757. The second variant will run on the latest Qualcomm Snapdragon 835 chipset, and is expected to be priced at 2,499 Yuan (approx. Rs 24,718). The third variant will also come with the same Qualcomm’s chipset and will be priced at 2,999 Yuan which is approximately Rs 29,667.

The Snapdragon 835 variant of the Mi 6 is rumoured to arrive in two variants – 6GB RAM with 256GB internal storage, and 4GB RAM with 128GB internal storage. Both the variants are said to feature OLED panels with 2K resolution. The other variant of Mi 6 which is said to use the MediaTek Helio X30 processor is rumoured to come only in one option which includes 4GB RAM and 64GB internal storage. The Mi 6 might feature an ultrasonic fingerprint scanner just like the Mi 5S, will run on Android 7.0 Nougat out-of-the-box and will boast a 12MP Sony sensor at its rear. The device is also expected to come in two variants based on the display, a flat screen display and a curved screen display.