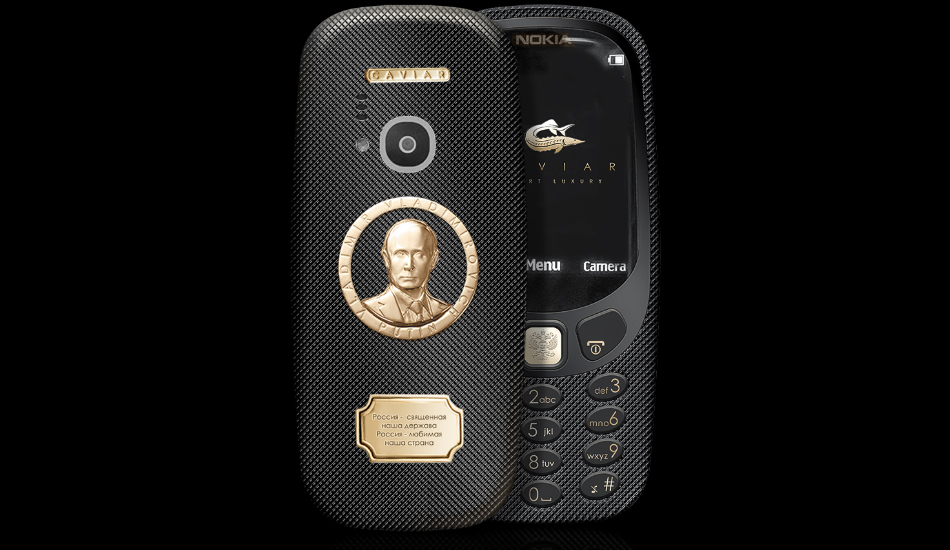 Dubbed as “Supremo Putin” is not a regular Nokia 3310, but a premium phone with gold and titanium features gives it the “luxury, style and character of president Putin."

Nokia finally launched the nostalgic feature phone, the 3310 at the MWC 2017 and the world is going gaga about it. And it seems Russia has its own way to celebrate the return of the feature phone after a German company known as Caviar has come up with an interesting alteration of the Nokia 3310 with Vladimir Putin-inspired theme.

Dubbed as “Supremo Putin”, the device is not a regular Nokia 3310, but a premium phone with gold and titanium features giving it the “luxury, style and character of president Putin, the most popular man in Russia”. The luxurious feature phone comes with a price tag of 99,000 Russian Rubles, which is equivalent to Rs 1.12 lakh. That is way higher than the average price of a regular Nokia 3310 which comes with a price tag of $52 (approx. Rs 3,500).

See also:Nokia to launch all its smartphones in India by Q2 2017, will bank heavily on after sale service

Coming to the Supremo, the phone comes with Putin image at the back of the phone coupled with a varnished wooden case lined with black velvet. “The return of the iconic phone from Nokia has not gone unnoticed by the Caviar designers, who immediately after the new edition of 3310 [was unveiled] introduced its own version,” the company said in a statement.

This is not the first time Putin has appeared on a phone. Earlier, the same company had come up with a Putin-themed Apple iPhone 7 Plus. The regular Nokia 3310 along with other smartphones are expected to hit the Indian market sometime in Q2 of 2017, probably by June.