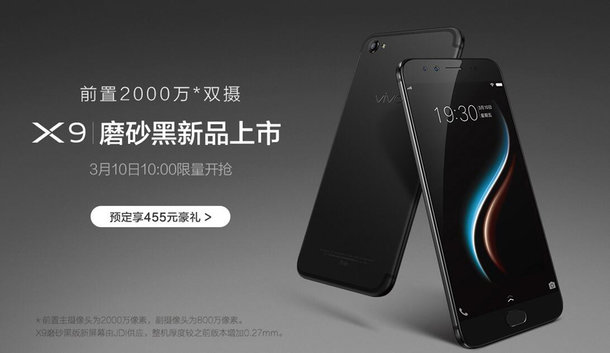 Vivo X9 Blue colour variant which is dubbed as Vivo X9 NBA Edition has officially gone on sale for purchase in China starting today. Earlier, the smartphone was available in Gold and Rose Gold colour options along with a Matte Black which was later launched at 2798 yuan (approx Rs 27,700) in China. The Vivo X9 NBA Edition is priced at 2998 yuan (approx Rs 28,055) in China. Vivo is also offering a power bank, water bottle, and a key-ring, all of which will feature official branding of the National Basketball Association, along with the smartphone.

The new colour variant has white antenna lines and black front bezels against a blue backside. There’s an NBA logo engraved at the back of the phone at the bottom. The NBA customization is not only limited to the surface alone, the user interface is NBA-themed in the form of wallpapers and icons.

To recollect, Vivo X9 smartphone was launched in China in November last year, alongside Vivo X9 Plus. The highlight of this smartphone is its dual front camera setup of which one is of 20-megapixel resolution, which comes with Sony IMX376 sensor and f/2.0 aperture, and the second camera comes with an 8-megapixel resolution for capturing depth information. On its back, it has a 16-megapixel shooter with f/2.0, PDAF and a LED flash.

The Vivo X9 has a metal unibody design and features a 5.5-inch full HD Super AMOLED display with a resolution of 1080 x 1920 pixels. It comes equipped with 2GHz Octa-Core Snapdragon 625 processor, along with Adreno 506 GPU. It has 4GB RAM and 64GB/128GB of internal storage. The smartphone runs on Android 6.0 Marshmallow which is wrapped under Funtouch OS 3.0 and also houses a fingerprint scanner which is embedded in its home button. The smartphone gets its strength from a 3050mAh battery with fast charging feature. Besides, X9 offers Dual SIM 4G with VoLTE, WiFi (802.11 ac), Bluetooth 4.2, and GPS. The handset measures 152.6x74x6.99mm and weigh 154 grams.