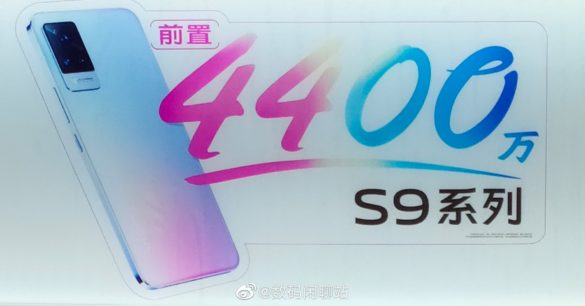 The Vivo S9 could sport a 6.4-inch display along with dual selfie camera setup consisting of a 44MP primary lens along with an ultra-wide-angle sensor.

Vivo is said to be launching the Vivo S9 on March 6th in China. Now new details about the camera setup of the upcoming Vivo smartphone has surfaced online.

As per an alleged promo poster leaked on Chinese Weibo by tipster Digital Chat Station, the upcoming Vivo S9 will sport a similar-looking rear design as the Vivo S7, and retains a triple-camera setup at the back.

The promo poster further revealed that the Vivo S9 will feature a 44 megapixels selfie camera as the Vivo S7 which is likely to be assisted by an ultra-wide lens. The front cameras will be housed inside a wide notch.

The Vivo S9 could sport a 6.4-inch display along with dual selfie camera setup consisting of a 44MP primary lens along with an ultra-wide-angle sensor. To recall, Vivo S7 also had a dual-camera setup on the front with a 44MP primary sensor and an 8MP secondary sensor. The phone will reportedly pack 4000mAh battery and 33W fast charging.

As per the Vivo S9 with Vivo V2072A model number spotted on Google Play Console will sport an FHD+ display, 12GB RAM. It will run latest Android 11 OS.