Vivo smartphones with model number Vivo 1916 and Vivo 1918 has been listed on the site.

Vivo is reportedly working on two new smartphones as both of them have been spotted on popular benchmarking website, Geekbench. Vivo smartphones with model number Vivo 1916 and Vivo 1918 has been listed on the site. 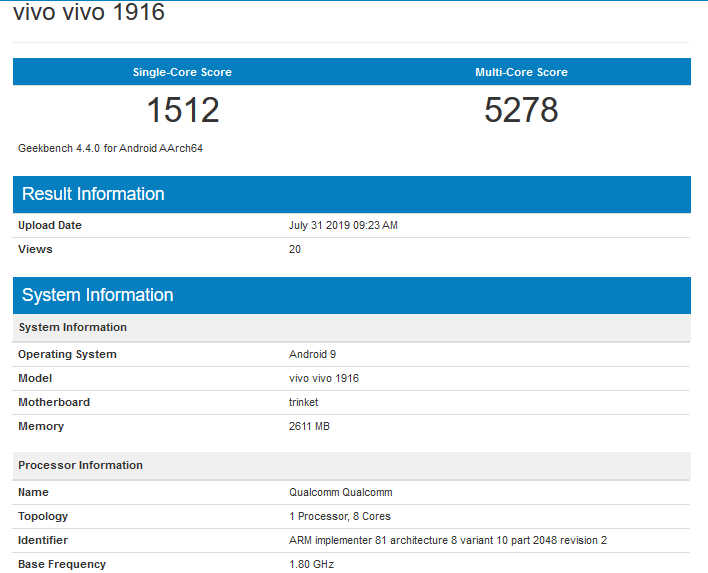 Moving on, the listing reveals that the phone runs on Android 9.0 Pie, which could be based on FunTouch OS 9.0. The phone has received 1512 points in the single-core test and 5278 points in the multi-core test. The device is loaded with 3GB of RAM.

Coming to Vivo 1918, the listing reveals that the phone will be powered by a Qualcomm Snapdragon 710 octa-core processor clocked at a base frequency of 1.71GHz. The listing reveals that the phone will come loaded with 4GB of RAM and it will run on Android 9.0 Pie with FunTouch OS 9.0 running on top of it. The phone has received 1933 points in the single-core test and 6046 points in the multi-core test. 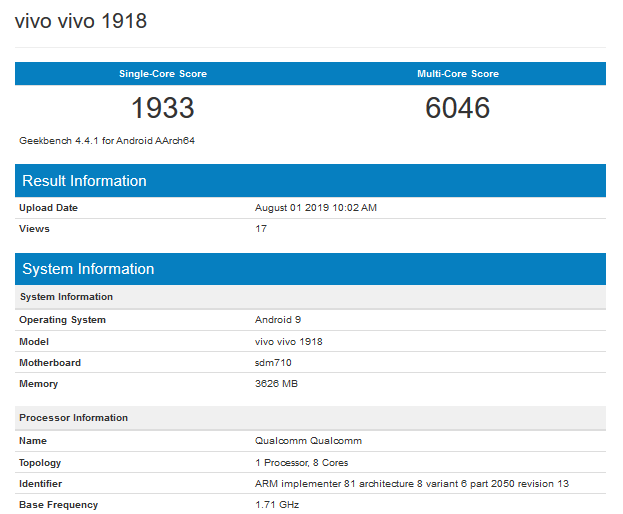 Meanwhile, the company has permanently slashed the price of Vivo V15 Pro in India. The 6GB variant retails at Rs 23,990 while the 8GB variant now comes at Rs 26,990. To recall, The phone was launched with 6GB RAM and 128 GB storage for Rs 28,990 and8GB RAM and 128 GB storage for Rs 29,990. Both the variants are now available at the discounted price on Flipkart and Amazon.

Vivo V15 Pro sports a 6.39-inch Full HD+ AMOLED Ultra FullView display with a screen resolution of 2340 x 1080 pixels and a screen-to-body ratio of 91.64 per cent. The phone is powered by a Qualcomm Snapdragon 675 processor and it is backed by 8GB of RAM and 128GB of internal storage.