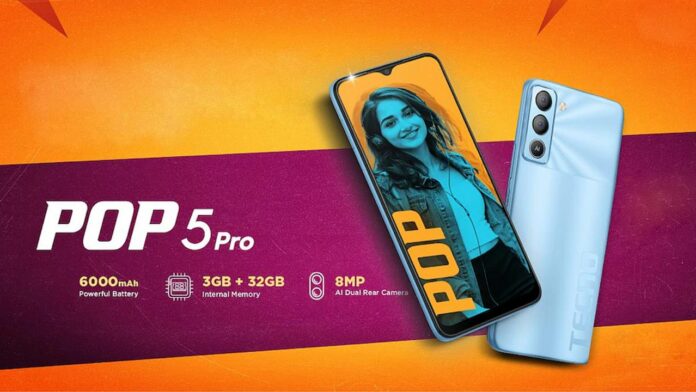 Tecno has launched Pop 5 Pro, the company’s latest smartphone in the new POP 5 series in India. It is now available from retail stores at a price of Rs 8499 for a single 3GB + 32GB configuration. The Tecno Pop 5 Pro has been launched in Ice Blue, Deepsea Luster and Sky Cyan colours.

The Pop 5 Pro comes with a 6.52-inch HD+ IPS LCD display with 269ppi pixel density and 480nits peak brightness, and 120Hz touch sampling rate. Further, the phone also supports a touch sampling rate of 120Hz, with a 90 percent screen-to-body ratio, according to the company.

Tecno has not revealed details of the processor powering Tecno Pop 5 Pro, which is paired with 3GB of RAM and 32GB of built-in storage. Users also have an option to expand the storage further up to 256GB via the micro-SD card slot. It is likley to have Quad-Core MediaTek Helio A22 processor.

The Pop 5 Pro comes with a dual-rear camera setup and an LED flash. It has an 8-megapixel rear camera along with a secondary AI lens. handset offers AI portrait mode, HDR mode and supports filters. On the front of the smartphone is a 5-megapixel selfie camera with an f/2.0 aperture lens.

It packs with 6000mAh mega battery. The user can talk to someone for up to 54 hours or enjoy music for up to 120 hours. Additionally, Battery Lab and Ultra Power Saving mode provides very longer battery backup with intelligent optimizations. Lastly, the Pop 5 Pro is IPX2 Splash Resistant, supports 14 regional languages.