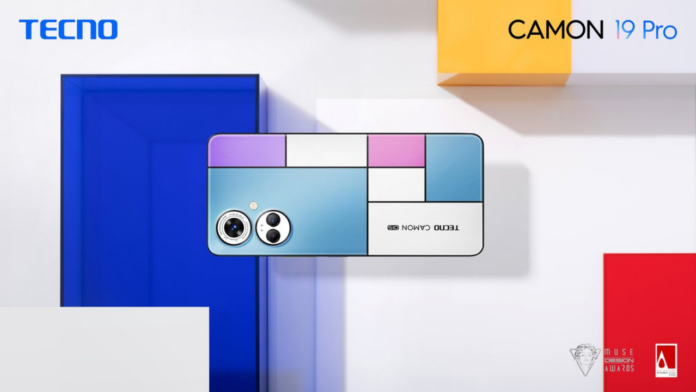 Tecno unveiled the Camon 19 series in India back in July consisting of two phones, expanding it with a third device earlier this month. Another addition to the lineup has now been tipped to launch in India which should be the Camon 19 Pro Mondrian Edition that features a colour changing panel. Moreover, the launch timeline for the device has also been leaked.

The report from MySmartPrice claims that it has learnt from its industry sources that Tecno is gearing up to launch a special edition of Camon 19 Pro in India. The publication claims that the company will launch the Tecno Camon 19 Pro Mondrian Edition in India in September.

This edition of the Camon 19 Pro can change its colour in sunlight because of the Sunlight drawing technology, also known as polychromatic photoisomer technology. Under sunlight, the rectangular blocks at the rear will change its colours from White.

As the smartphone has already been unveiled globally, we can expect the Camon 19 Pro to feature the same specs in India as well. The phone sports a 6.8-inch IPS LCD with a Full HD+ resolution and 120Hz refresh rate support. The front of the phone features a punch hole cutout on the center to house a 32MP camera sensor.

Under the hood, the Tecno phone features a Mediatek Helio G96 processor. It should have up to 8GB of RAM and up to 256GB of inbuilt storage. The Camon 19 Pro has a triple-camera setup on the back inckuding a 64MP main camera sensor with support for optical image stabilisation (OIS), a 50MP portrait sensor and a 2MP macro camera.