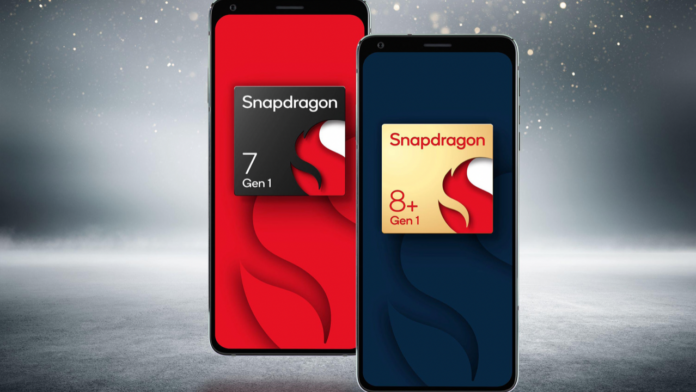 Qualcomm has unveiled the long awaited ’plus’ successor to its flagship chipset called Snapdragon 8+ Gen 1. The chipset is now based on TSMC’s 4nm node instead of Samsung’s like on the original variant. Further, the company also announced Snapdragon 7 Gen 1 mid-range processor that is the successor to the famous and much loved Snapdragon 778G processor.

Talking about the Snapdragon 8+ Gen 1 first, the SoC features the same octa-core architecture setup as its predecessor, with a single ultra high performance Cortex-X2 core, three Cortex-A710 cores, and four Cortex-A510 efficiency cores. However, these now come with a few minor tweaks to improve the premium smartphone experience.

As for optics, the SoC is equipped with an 18-bit Spectra ISP that can handle up to 200MP sensors and 8K video capture at 30fps (4K at 120fps), along with image processing tricks like multi-frame noise reduction and staggered/DoL HDR. It even supports a dedicated bokeh engine and support for HLG, HDR10+ and Dolby Vision formats.

It employs the Snapdragon X65 modem which can deliver peak 5G speeds of up to 10Gbps, while the FastConnect 6900 WiFi modem runs Wi-Fi 6/6E at up to 3.6GHz. The chipset also supports Bluetooth 5.3 connectivity that includes Qualcomm’s latest aptX Lossless technology and Bluetooth LE Audio.

Moreover, Realme has also claimed in its Weibo post that the flagship smartphone will be the first Android mobile to be equipped with this processor. Lastly, the ROG brand from Asus has also made an announcement on its official Instagram page where it has said that the ROG Phone 6 will be the first gaming smartphone to sport the Snapdragon 8+ Gen 1 SoC. It will come with the Snapdragon 8+ Gen 1 SoC in both China and globally.

Snapdragon 7 Gen 1 is the first mid-range SoC from Qualcomm this year. It is also based on a 4nm process and houses four Cortex-A710 cores clocked at 2.4GHz and four Cortex-A510 cores. It has Adreno 662 GPU that offers 20 percent faster performance than its predecessor, according to the company.

The new Snapdragon processor is further equipped with an X62 5G modem on the connectivity part, that is capable of 4.4Gbps download speeds and dual 5G connectivity. It supports WiFi-6E and Bluetooth 5.3 along with Snapdragon Sound and aptX support. The chipset can support up to 16GB LPDDR5 RAM.

Snapdragon 7 Gen 1 will be adopted by leading global OEMs and brands including HONOR, OPPO, and Xiaomi, with commercial devices expected to be available in Q2 2022. The first device to launch with this SoC has been rumoured to be the Oppo Reno 8 which is also launching today.