Snapdragon 6 Gen 1 and the Snapdragon 4 Gen 1 processors have been announced which will serve the lower mid-range spectrum. 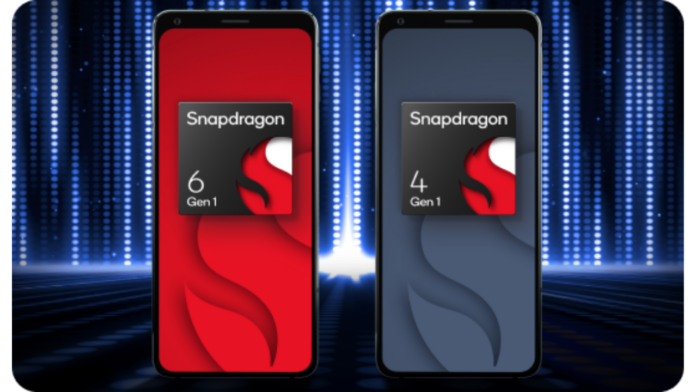 The Snapdragon 4 Gen 1 has an octa-core CPU structure comprising of 2x Cortex-A78 and 6x Cortex-A55 cores. The processor is claimed to bring 15% improvement over the Snapdragon 480 with a 10% performance boost in the GPU performance. For connectivity, the processor integrates the Snapdragon X51 5G Modem-RF System which delivers sub-6 GHz 5G, with download speeds up to 2.5 Gbps, while the Qualcomm FastConnect 6200 mobile connectivity system is an integrated 2×2 Wi-Fi 5 platform.

Other features include 108MP snapshot support (no 4K video recording), 120Hz display support at FHD+ resolutions, Quick Charge 4+ support, and Bluetooth 5.2. Qualcomm says that the first devices with the SoC will arrive in this quarter (Q3 2022). iQOO has revealed that the iQOO Z6 Lite will be one of the first phones to employ the new chipset.

The Snapdragon 6 Gen 1 is also consisting of an octa-core CPU (4x Cortex-A78 and 4x Cortex-A55) with a claimed performance boost of 40% over the Snapdragon 695. The processor also employs an Adreno GPU that promises to deliver 35% better performance, with features like variable rate shading and jank reduction.

Camera capabilities include 200MP single-camera support, 25MP+16MP dual camera support, and 13MP triple camera capabilities. There’s support for 4K HDR video recording as well. For connectivity, there’s Bluetooth 5.2 and Wi-Fi 6E. There’s support for Quick Charge 4+ and 120Hz at FHD+ display resolutions. Smartphones with this chip are set to launch in Q1 of 2023. Motorola has also confirmed that it will launch a phone with the Snapdragon 6 Gen 1 SoC.