Samsung has led the premium smartphone segment in the first half of the year, thanks to its Galaxy A71 and A51.

The current year 2020 has been a devastating year for every industry. But despite the pandemic situation and the challenges which the OEMs have had to face, according to a report by CMR India Mobile, India’s Smartphone shipments in the premium segment (>₹25,000) grew 18% YoY in the first half of 2020. 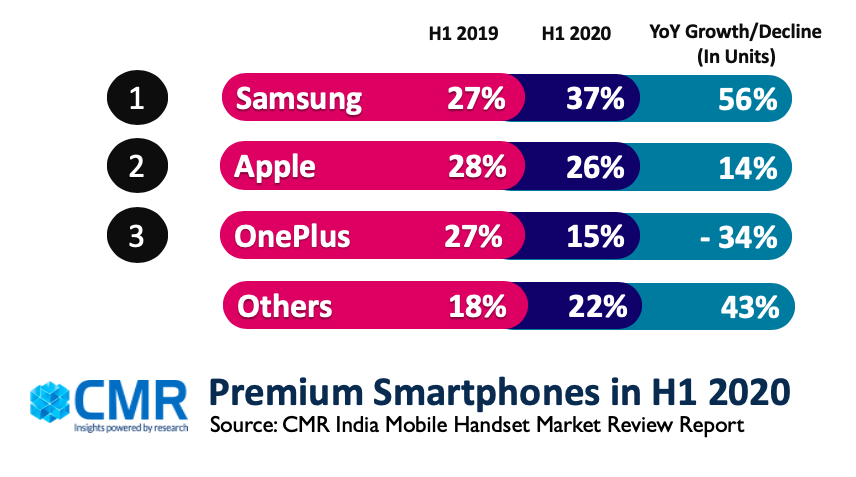 Amit Sharma, Analyst – Industry Intelligence Group (IIG), CMR said, “In H1 2020, consumer demand in the premium smartphone segment continued to remain high, and, in fact, fuelled the market growth. This bodes well for H2 2020, and, especially, in the run-up to the all-important festive season. Beyond the incumbents – including Samsung and Apple, aspirational premium brands will seek to make in-roads into the premium segment.”

The report released by CMR India consisted of the following segments:

Then comes the Super Premium segment which categorises phones between Rs. 50,000 and Rs. 1,00,000. This segment accounted for 2% of the total sales of smartphones in the first of 2020. The winner for this segment was iPhone 11 priced at Rs. 64,900 and contributed 39% of the shipments. Apple accounted for 56% share in this segment, followed by Samsung with 34% share, and OnePlus being the third one with 4% share.

The last one is the Uber Premium segment which categorises phones priced more than Rs. 1,00,000. The iPhone 11 Pro Max was the winner for this segment and accounted for 40% of the shipments in this segment. Apple had 67% market share in this segment, Samsung coming at second with 30% market share.

The Handset review report by CMR also tells us that Samsung led the smartphone market in India in the premium segment, thanks to its Galaxy A71 and A51. The former contributed 38% of the shipments while the later contributed 13%.

Apple came at second with a 14% year-over-year growth and a 26% market share. Apple was able to acquire 8% of the total market share. The californian giant’s iPhone 11 continued to face major success throughout Quarter 1 and 2.

OnePlus came in at third, capturing 15% of the total market share with the help of its OnePlus 8 which got launched back in May.

According to CMR India, the premium smartphone segment is expected to grow by 20% in the second half of 2020 majorly because of the upcoming festive season. Apple and Samsung both are expected to acquire 28%-29% of market share each.