Here's our take on Samsung's 2021 journey of smartphones. 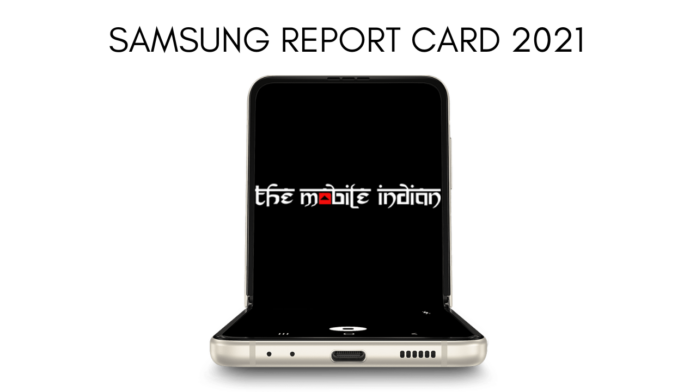 India has remained an important market for almost all the major smartphone brands, and Samsung is one of them. The biggest smartphone manufacturer considers India as a key market for its business.

Samsung released 29 models spread across all price segments in 2021. With a wide range of models, what did Samsung do right, and where did it go wrong? and what were the best smartphones launched by Samsung in 2021. Let’s dive deep into the journey of Samsung for the year 2021 with our ‘Report Card’ series:

Under Rs 15,000, Samsung launched a total of 20 devices while 17 devices were launched between Rs 15,000 and Rs 30,000, accounting for 38% and 32% market share, respectively, for all devices launched by Samsung. These two segments remained key focus points for the brand throughout the year.

Throughout Samsung’s journey of 2021, Foldables have remained a key element and the brand has truly transformed the foldable form factor from being a prototype to a commercial product. Galaxy Z Fold has had three iterations, while the Z Flip had its second one this year. And the latter seems to be gathering more attention across the globe.

Further, Samsung truly revived its A-series smartphones in 2021 and saved them from getting crushed beneath the burden of M-series and S-series, with the launch of the Galaxy A52 and the A72 that acted as all-rounders in their respective segments. Moreover, Samsung’s mid-range smartphone portfolio was strengthened with the launch of smartphones such as the Galaxy M52 that came with great displays, batteries, cameras and more.

As for the misses, it is not particularly for Samsung but for every brand where the flagship phones are reaching a saturation point. We couldn’t notice anything unique implemented within their S21 series.

A considerable letdown was the exclusion of the Note series from Samsung’s 2021 smartphone portfolio. It felt like a missed opportunity as the Galaxy Note series has been that series of smartphones that always stands out from the crowd. And lastly, Samsung launched 20 devices in the budget segment under Rs 15,000, but none of those smartphones could strongly compete with the likes of Xiaomi and Realme.

Amongst the 29 models, we feel the top 3 smartphones from bottom to top are as follows:

When you love flagships from Samsung but don’t want the foldables, the Galaxy S21 Ultra becomes the obvious choice as it gets all the flagship necessities correct.

The Galaxy Z Flip3 could have been on the top but because its main focus was more on the appearance of the device rather than the usability and utility value, we put the device at second position.

The Z Fold3 holds the crown for the first position because of the exact reason why Z Flip3 couldn’t make it, and thats the utility value. Where you had to open the Z Flip3 every time you want to make a call or to use the device normally that could get annoying at times, the Z Fold3 had a 6.2-inch 120Hz Dynamic AMOLED 2x cover display and a bigger display inside which one can use for multiple purposes. As a result, the smartphone has uniqueness, utility value, great cameras, decent battery life and an under-display camera as well.

And that was it for our report card of 2021 for Samsung. However, we expect some big things from the company next year, including the new generation of foldables and the S22 series for which we are already seeing a lot of leaked information.