Samsung Galaxy S23 series renders have been leaked, showcasing the design of the trio in the series. 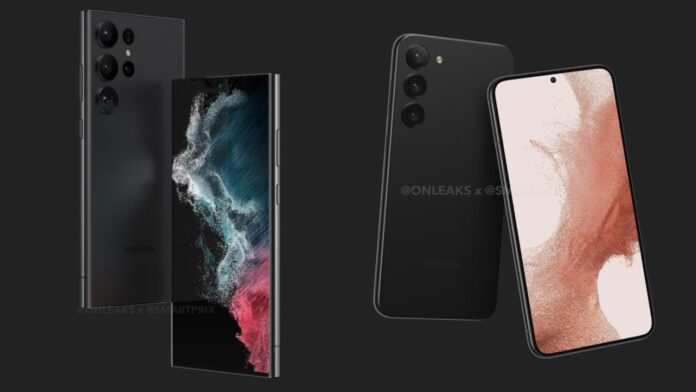 Samsung’s Galaxy S series is set to get renewed next year with the launch of the Galaxy S23 series and new leaks about the devices have emerged, giving us our first look at all three devices under the series – Galaxy S23, Galaxy S23+ and the Galaxy S23 Ultra. Moreover, we may also have an expected time of arrival for the smartphone series.

The leak comes from Steven Hemmerstoffer, aka OnLeaks, who gives us an early glimpse on the Galaxy S23 series. He has shared the renders for all three devices. Talking about the Galaxy S23+ and the regular Galaxy S23, the form factor of the devices largely remains the same.

The phone is slightly taller and less wide. They have a flat back and front with what looks to be similar flatter sides as the Galaxy S22+ and the Galaxy S22. The major change is at the rear, where the camera island has been removed and replaced with a design similar to the Galaxy S22 Ultra. Each of the sensors is placed separately alongside the flash.

As for the front, the renders suggest the phones will have slightly broader bezels than before, with the display still the same size. According to the information shared by OnLeaks, the S23 display will be 6.1-inches diagonally. This display will likely refresh at 120Hz. The renders also reveal that the display will have a centrally located punch-hole, which according to previous rumours, could house a 12MP shooter.

As for the Plus model has the same design as the regular variant but with a bigger size, the same way S22 and S22+ were. The Samsung Galaxy S23+ will have a 6.6-inch display on the front, and its dimensions will be slightly bigger at 157.7 x 76.1 x 7.6mm. The smartphone is going to have a flat back panel, and the volume rockers and power buttons are placed on the rear panel. The speaker grille and the USB type-C port are available on the bottom.

While the size of the device remains the same as the previous generation Ultra, Samsung will bring improvements in terms of peak brightness, colour accuracy, lowest screen reflectance, and HDR performance. The power button and the volume rockers of the device are situated at the right spine of the smartphone. The speaker grille, USB type-C port, and SIM tray can be seen at the bottom side of the device. Apart from that, the bottom also has the S-Pen slot.

The refinement also covers the rear panel where the two small sensors on the right side are now flushed in the rear panel. The metal frame of the sensors is larger than what we saw in Galaxy S22 Ultra. The side curvature of the smartphone is less intense this time around.

Samsung Galaxy S23 may have bigger battery than Galaxy S22

The Galaxy S series generally debuts in March or February of every year. However, The latest report from the South Korean news outlet ET News says that the Samsung Galaxy S23 series may come out sooner than expected. According to ET News, the Galaxy S23 series’ is coming early to secure the premium smartphone market share by narrowing the launch duration between the iPhone 14 lineup, which went official earlier this month.