Samsung Galaxy A71 passes through Geekbench with 8GB RAM, Android 10

Samsung's upcoming Galaxy A71 has now popped up on Geekbench running Android 10. 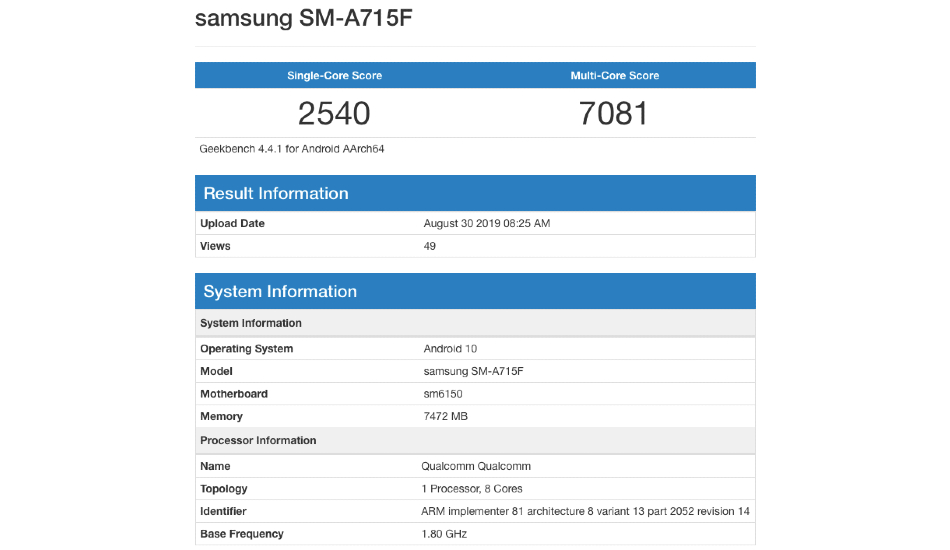 The Galaxy A71 which made it through Geekbench features 8GB of RAM and is powered by a Qualcomm ‘sm6150’ motherboard which is none other than the Snapdragon 675 chipset found on the Galaxy A70 and yet-to-be-announced A70s that recently received Wi-Fi Alliance certification.

Another interesting thing to note is that the Samsung phone runs on Android 10 OS out of the box. If that the Geekbench spotting means anything, this could mean that a Galaxy A-series phone will be the first phone to get a dose of Android 10 before next Galaxy S-series phone.

Prior to this, the Galaxy A71 was touted to feature four cameras with a 48-megapixel primary lens, 12-megapixel wide-angle lens, a 12-megapixel telephoto lens with 2x optical zoom and Time of Flight (ToF) sensor.

The Galaxy A71 could debut alongside the Galaxy A91 in India well before the device is launched globally. However, if the A71 does release soon, it could still run on Android 9 Pie since Samsung ships the newest version of Android only to its flagship S-series first and it’s not likely that Samsung will make changes to its software policy now.

Besides the A71, Samsung is also developing a Galaxy A91 and Galaxy A90 5G which were recently spotted on the company’s official site. The Galaxy A91 is noted to support 45W fast charging while the Galaxy A90 5G will have to suffice with 25W fast charging. Both devices are expected to come in October 2019 with 6.7-inch AMOLED displays, in-display fingerprint scanners, 48MP triple camera setups and a Qualcomm Snapdragon 855 processor.