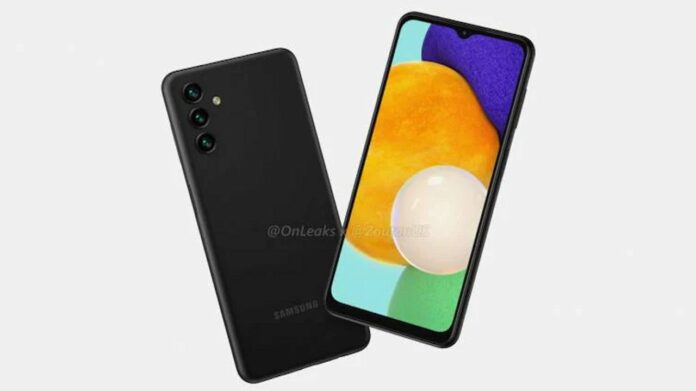 Samsung is currently working on Galaxy A12 successor, which will be called the Samsung Galaxy A13 5G. Now the official-looking design renders of the Galaxy A13 5G have surfaced online.

Tipsters Steve Hemmerstoffer, aka OnLeaks and Zouton have collaborated to share the leaked renders. As per the renders, the Galaxy A13 5G will sport a water-drop notch design. The display is surrounded by thin bezels but at the chin, they are a bit thicker. The phone will have an 83.4 per cent screen-to-body ratio. At the front, the device appears to have a 6.48-inch Infinity-V display.

The phone will sport a triple-camera setup on the back. The tipster has also leaked the device specifications and features. It will come with a 50MP primary camera sensor with an f/2.0 aperture, a 5MP ultrawide sensor and a 2MP f/2.4 depth sensor.

On the right, the Samsung Galaxy A13 5G will come with a side-mounted fingerprint sensor. At the bottom, there will be a USB Type-C port and a 3.5mm headphone jack.

Under the hood, the phone will pack a MediaTek Dimensity 700 SoC. It will come with up to 6GB of RAM and 128GB of internal storage. The Galaxy A13 5G will pack a 5000 mAh battery. Samsung is said to offer 25W fast charging support. However, the phone is expected to pack a 15W charging brick inside the box.

The smartphone recently appeared on Geekbench as well. The Geekbench listing revealed that the Samsung Galaxy A13 smartphone would be powered by an ARM MT6833V/NZA processor, which is the codename for the MediaTek Dimensity 700 SoC.

Moving on, the listing reveals that the phone runs on the Android 11 operating system. In addition, the device is loaded with 4GB of RAM. In the Geekbench test result, the smartphone scored 465 and 1106 points in the single-core and multi-test, respectively.