The Redmi flagship phone will be featuring a 20-megapixel Pop-up selfie AI camera.

We already know that Xiaomi is all set to unveil its latest Snapdragon 855 powered flagship device soon. As per a recent report, the phone might be launched on May 13 in China. Now Redmi General Manager Lu Weibing is teasing the upcoming launch by revealing few of its features.

Lu Weibing has posted on his Weibo (a Chinese microblogging website) account. In the post, he has shared a screenshot of a phone which reveals that the phone will come with an in-display fingerprint sensor. Alongside, he also mentions that he is satisfied by the battery life of the Redmi flagship phone. He added that the battery performance of the smartphone has exceeded his expectations. 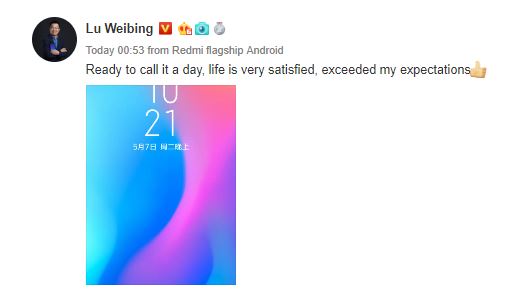 As per leaks, the Redmi flagship phone will be featuring a 6.39-inch AMOLED display and it will be powered by Snapdragon 855 processor. The phone will be backed up by a 4000mAh battery with support for 27W fast charging.

The Redmi flagship phone will be featuring a 20-megapixel Pop-up selfie AI camera. The rear of the device will feature a triple rear camera module with Sony's IMX586 48-megapixel primary lens and a super-wide angle lens.

Lu Weibing recently confirmed that the upcoming phone will be equipped with an ultra wide-angle lens. He also revealed that the phone will support NFC and sport a 3.5mm audio jack

Xiaomi sends Redmi Note 7 in space, comes back with images of the earth

Redmi flagship smartphone could be called as Redmi K20 Pro

Redmi Snapdragon 855 flagship smartphone to launch on May 13?