The cutout in the middle on the back of the smartphone seemingly confirms a triple camera setup on the phone.

Redmi K20 has recently been confirmed to launch in India soon, however an exact launch date is of the phone in India is still not known. Now CEO of Xiaomi, Lei Jun, has posted some pics of this flagship's retail box, official case, and merchandise.

The Redmi K20’s retail box shows a dual color design. The box is purple in colour while the lid is black while the main box itself is purple. There is an image of the Redmi K20 demon king below the box. 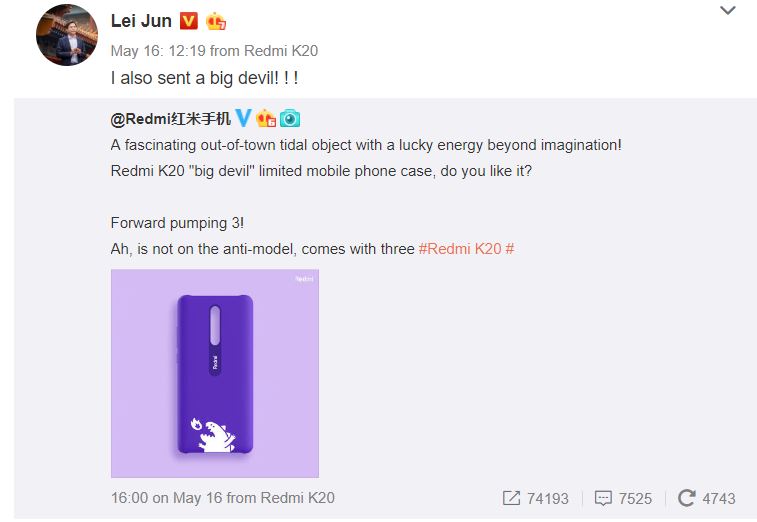 Apart from the retail box, the phone’s official case has also been teased. Just like the box, the case also comes in purple colour with an image of the demon king. The cutout in the middle on the back of the smartphone seemingly confirms a triple camera setup on the phone.

Moreover, if you notice at the case, you can see there is no fingerprint cut-out. So it is quite a possibility that this device has in-display fingerprint feature. The case also shows that the phone will feature power and volume buttons on the right side. The company has also shared a photo of t-shirts with an image of the demon king in the center.

As per rumours, the Redmi K20 will feature a notch-less 6.39-inch Full-HD+ screen. The smartphone will be powered by the latest octa-core Qualcomm Snapdragon 855 chipset. The Redmi K20 will have 6GB of RAM with 128GB of internal storage.

On the camera front, the phone will feature a triple rear camera setup with a combination of a 48-megapixel Sony IMX 586 primary sensor, a 13-megapixel ultra-wide angle secondary sensor, and an 8-megapixel depth sensor. On the front, the smartphone will have a 20-megapixels pop-up selfie camera.

Redmi flagship smartphone could be called as Redmi K20 Pro