Realme India has teased the upcoming launch of Realme Narzo 50 5G. It is said to pack a 4,800mAh battery with 33W charging support. 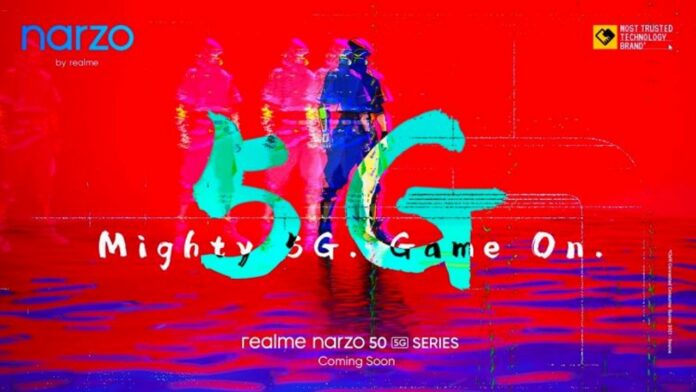 Realme is gearing up to add a new smartphone in its Narzo series in India soon. The company has officially created a landing page for the Realme Narzo 50 5G, which means we may see more than one 5G Narzo 50 phone.

In addition, the company took to its social media handles to confirm the arrival of the smartphone in the country. On its official Twitter handle, Realme India has teased the upcoming launch. However, the tweet does not reveal the exact launch date. Take a look at the teaser below:

Realme’s Narzo 50 series currently includes phones like Narzo 50, Narzo 50i, Narzo 50A and Narzo 50A Prime. However, all of them have 4G connectivity. The upcoming device will be a 5G phone possibly called the Realme Narzo 50 5G.

As per rumours, the phone might sport a 6.58-inch AMOLED display. It is said to pack a 4,800mAh battery with 33W charging support. The phone is also rumoured to come with a 13-megapixel dual rear camera setup.

Besides, the smartphone is equipped with a triple camera setup featuring a 50-megapixel primary camera featuring a Sony IMX766, an 8-megapixel f/2.2 ultra-wide-angle camera, and a 2-megapixel macro camera. It comes with a 16-megapixel selfie camera sensor in the front.