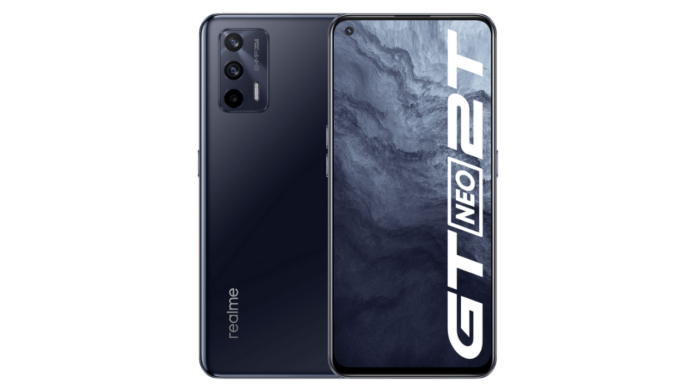 The phone will come with an FHD+ display with 1080 X 2400 pixels resolution and Android 11 OS as per the listing. It will be powered by MediaTek MT6893 SoC which is coupled with Mali G77 GPU. In addition, the phone will have 8GB RAM, suggests listing.

The Realme GT Neo 2T sports a 6.43-inch OLED screen with a Full HD+ resolution. This display refreshes at a rate of 120Hz and has a DCI-P3 wide colour gamut. Furthermore, there’s a 360Hz of touch sampling rate and a 91.7% screen-to-body ratio.

Furthermore, you are getting 8GB or 12GB of RAM with 128GB or 256GB of storage. A triple camera unit includes a 64-megapixel primary sensor, an 8-megapixel ultra-wide sensor, and a 2-megapixel 4cm macro sensor.

Further, the smartphone is backed by a 4500mAh battery with 65W fast charging support. Additionally, on the software front, you will get Realme UI 2.0 based on Android 11. Additional features include stereo speakers with Hi-res audio and a linear motor for haptics. Connectivity options include dual-SIM 5G, dual-band WiFi 6, Bluetooth 5.1, dual-frequency GNSS, NFC, USB Type-C port, and a 3.5mm headphone jack.