Realme 9i 5G launch event is all set to take place in India this month. 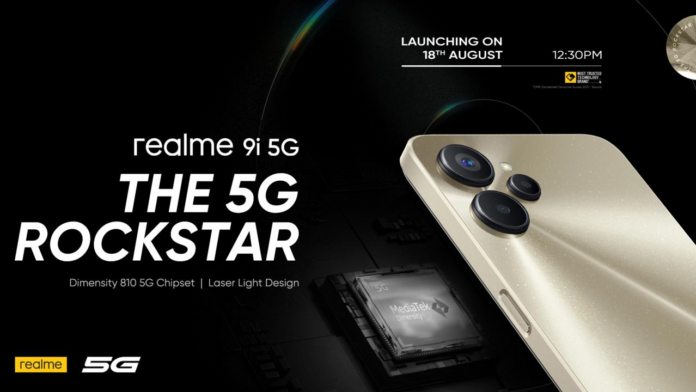 Realme has announced that it is all set to launch a new 5G device in India called the Realme 9i 5G. The new variant will succeed the 4G model that debuted in the country back in January of this year. Apart from that, the brand also revealed as to which chipset will be powering the device.

Realme 9i 5G launch event will take place digitally Thursday, August 18 2022 at 12:30 PM. One can watch the live broadcast of the event on realme’s social media channels, including YouTube and Facebook. The realme 9i 5G is confirmed to be powered by the MediaTek Dimensity 810 5G chipset.

Realme says it will be packed with a “massive battery” and an AI Triple camera setup. The exact details weren’t revealed by the brand. What it also showcased was the design of the device which shows that it flat sides with the power button on the right. The three cameras can be seen placed individually at the back. No other specifications of the Realme 9i 5G have been revealed as of now.

Talking about its 4G counterpart, it sports a 6.6-inch IPS LCD full HD+ display with 1080 × 2408 pixel resolution and a 90Hz refresh rate. Moreover, the display panel has peak brightness levels of 480 nits. It is powered by the Snapdragon 680 chipset coupled with 6GB RAM and 128GB internal storage. In addition, the storage is expandable up to 1TB via a dedicated microSD card slot.