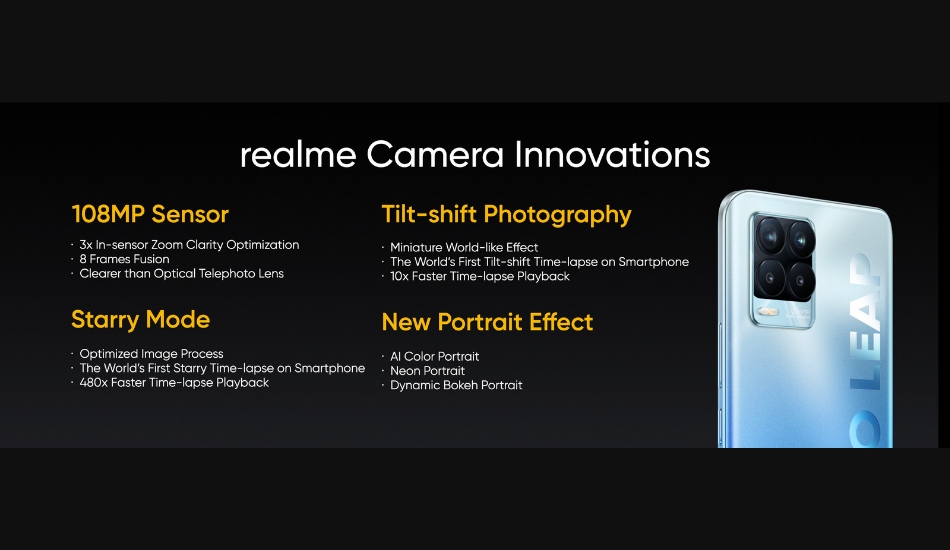 Realme 8 Pro has now been confirmed to feature the Samsung HM2 108MP sensor which will compete with Xiaomi's Redmi Note 10 series that will also feature a 108MP sensor.

While a lot of the fans expected the brand to reveal a lot more and launch the Realme 8 series, the event failed to meet the expectations and looked more like a ‘we are not missing out’ announcement as even Xiaomi’s upcoming smartphone, the Redmi Note 10 series, will feature a 108MP sensor on the back.

The rivalry between the two brands continues and this looks like a move to garner more market share, or at least not miss out on what it could have if it hadn’t introduced the 108MP sensor. Also, the brand held the event just 2 days ahead of when Xiaomi is going to launch its Redmi Note 10 series, that is on 4th March.

Realme has said that with the realme 8 series, it will provide three portrait filters including Neon Portrait, Dynamic Bokeh Portrait, and AI Color Portrait so users can conveniently choose and customize the bokeh effect that is the best according to the scene.

Meanwhile, the Realme 8 and 8 Pro key details are under wraps at the moment. Realme 8 was earlier spotted on Geekbench with the model number RMX3092. As per the listing, the device will be powered by the MediaTek Dimensity 720 octa-core processor that will be paired with 8GB of RAM. The device will run on Android 11 with Realme UI 2.0 on top and should also support 65W fast charging