The latest update shifts the build number of the Realme 3 Pro to version RMX1851EX_11_A.15 and weighs in at 2.69GB, which can be downloaded at the Realme Software update page. First and foremost, Realme has updated the security level of the phone to June 5, 2019, Android security patch.

Realme has now started rolling out an update to the Realme 3 Pro bringing new features, apps and the latest Android security patch. The update comes two months after the company added 960fps slow-mo support to the camera of the Realme 3 Pro.

The latest update shifts the build number of the Realme 3 Pro to version RMX1851EX_11_A.15 and weighs in at 2.69GB, which can be downloaded at the Realme Software update page. First and foremost, Realme has updated the security level of the phone to June 5, 2019, Android security patch.

The camera on the Realme 3 Pro now supports 240fps slow-motion video recording in addition to the 960fps video function that was already present on the device. Besides that, the update brings swipe gestures from both sides in navigation mode, a new lock screen magazine function and a realme account function. The new swipe gestures will allow users to swipe inwards from either of the edges of the phone to go back to the previous page. 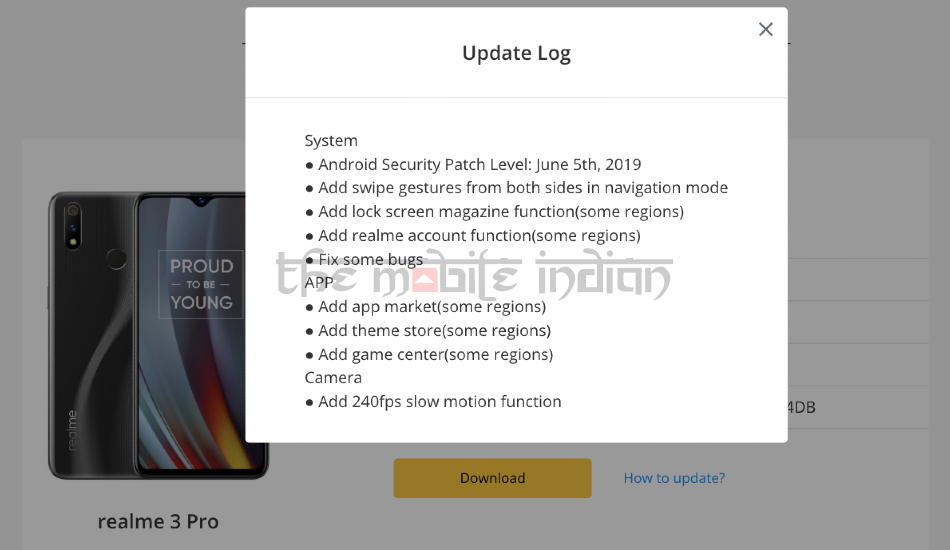 With this update, Realme 3 Pro users will also be greeted with a new app market, theme store and a game centre which will be available as apps inside the phone. The App Market will be realme’s version of an App Store while the Game Center will focus on finding and installing games. The new Theme Store will allow users to find and install themes, wallpapers, icon packs and lock screens.

Users can check for the new update by going to Settings > Software Update section or download the firmware directly from the Realme website to flash it.

The Realme 3 Pro runs on Android 9 Pie with ColorOS 6.0 on top. It is equipped with a dual-camera setup on the back with a combination of 16-megapixel primary lens with Sony IMX519 sensor, f/1.7 aperture, 1.22-micron pixel along and a 5-megapixel secondary shooter with f/2.4 aperture. The phone offers a 25-megapixel front camera with an aperture of f/2.0 aperture and 1/ 2.8 sensor size.

It sports a 6.3-inch Full HD+ display with a screen resolution of 2340 x 1080 pixels, 90.8-per cent screen-to-body ratio and Corning Gorilla Glass 5 protection. The Realme 3 Pro is powered by Qualcomm Snapdragon 710 SoC, paired with 4GB/ 6GB of RAM and Adreno 616 GPU. The phone is equipped with 4045mAh battery with VOOC 3.0 fast charging.