Sony Xperia XA2 is expected to be announced at the upcoming MWC event to be held later this month.

Seems like Sony is getting ready for the launch of Xperia XA’s successor soon in the United States. As per the reports, the Sony’s upcoming device with FCC ID of PY7-84773W has got the all necessary approval from Federal Communications Commission (FCC) that regulates interstate and international communications by radio, television, wire, satellite and cable in the US. Although, the name of the device is not revealed officially, but as per reports, the device will be launched as Sony Xperia XA2 or XA (2017).

Sadly, the FCC listing does not reveal any specifications of this upcoming smartphone. If indeed, this is the Xperia XA 2 or XA (2017), then the phone might be announced during MWC 2017. The design of the device in FCC documentation is quite similar to the previously leaked photos. 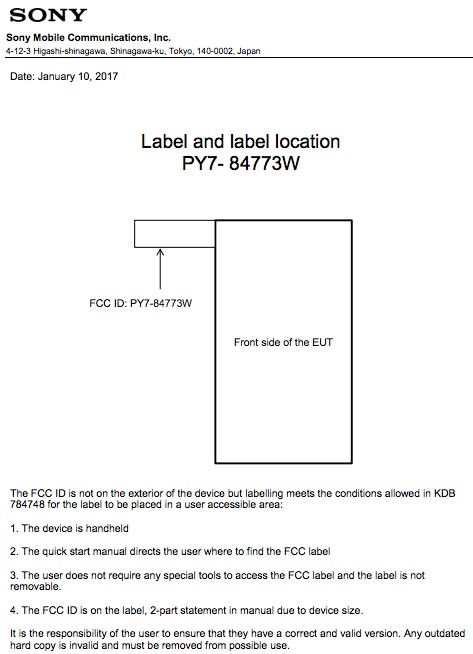 The alleged images of the so called Xperia XA 2 smartphone were leaked in China recently. The leaked images revealed some of the specifications of the smartphone, which includes Android Nougat operating system out of the box with Sony’s custom UI on top of it. It is expected to be powered by MediaTek Helio P20 64-bit octa-core processor coupled with 4GB of RAM and 64GB of internal storage. As per reports, the smartphone is likely to flaunt a 23-megapixel rear camera and 16-megapixel front camera for selfies. It also said to have a USB Type-C port along with a 3.5 mm audio jack.

Earlier also few images of the said device were leaked online revealing some details about the upcoming Xperia smartphone. The images showed that the big power/lock keys found on a Sony phone are replaced by a small one on the successor which hinted that the successor may not come with a fingerprint scanner. A USB Type-C connector is also shown which replaces the micro USB port. Further, the images showed the smartphone in three different colour options which include red, purple and navy blue. The proximity and light sensors are positioned in a mirrored manner in the photos. There is a 3.5mm headphone jack also on its flat top edge whereas a slit at the bottom of the phone hinted at the stereo speakers in this model.

The Sony Xperia XA 2 is expected to be priced around 2,200 Yuan which is approximately Rs 21,471. We expect the device to be unveiled at the upcoming MWC event to be held later this month.