Oppo is all set to launch its new “Selfie Expert” smartphone Oppo F5 on October 26 in the Philippines for which the company has already sent the media invites. Now as per an image leaked from Thailand, the Oppo F3 will come in three variants. 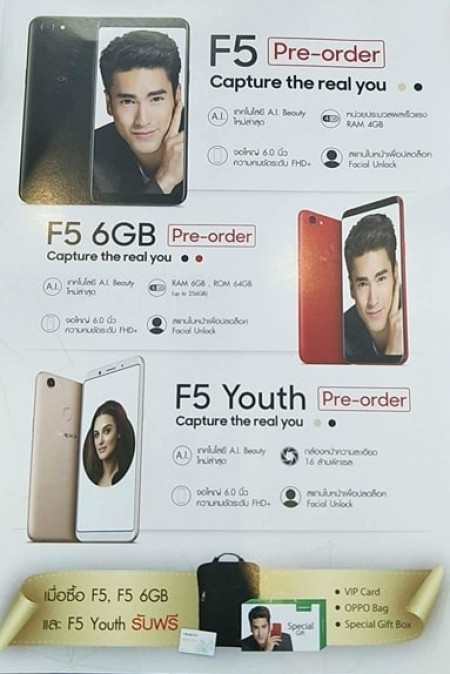 There will be a standard Oppo F5 in gold and black colours, a more powerful Oppo F5 6GB and 64GN internal storage with red and black colours and a more affordable Oppo F5 Youth with 16-megapixel font camera in gold and black colours. The Oppo F5 is said to feature 6-inch display with full HD+ display with the resolution of 2880×1440 pixels and an aspect ratio of 18:9. It will reportedly be powered by Qualcomm Snapdragon 660 chipset which will be coupled with 4GB of RAM. For the camera, the Oppo F5 will boast dual-camera setup at the front which is said to be a pair of 16-megapixel sensors. At the rear, it might feature a 20-megapixel single camera. The Oppo F5 is expected to be backed up by a 4,000mAh battery.

The 6GB Oppo F5 variant will have the same specs as of standard F5 except the increase in memory configuration i.e from 4GB RAM to 6GB RAM. The Oppo F5 Youth variant will be toned down version of the existing Oppo F5. The image shows this variant having one front-facing camera. The image also says buyers can pre-order the phones and get gifts such as a VIP card, OPPO bag, and a special gift box.