Oppo A95 4G renders and colour options have now leaked online. It will come in Glowing Starry Black and Rainbow Silver colours. 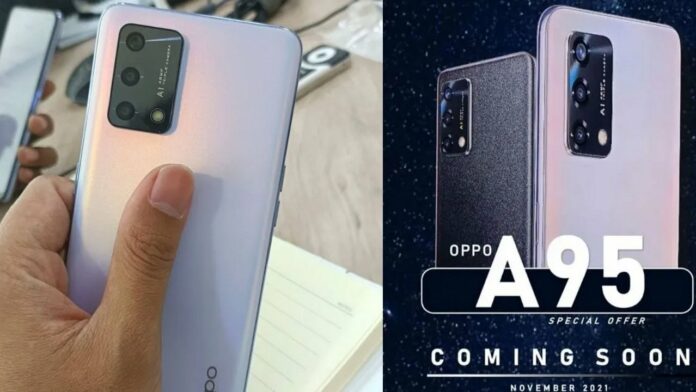 Oppo is reportedly working on a new smartphone called as Oppo A95 4G. Now as per a new leak, the upcoming phone will be launched in Southeast Asian markets in November. Additionally, renders have also been leaked online

Tipster Sudhanshu Ambhore has revealed two of the promotional posters for the Oppo A95 4G, which reveals some renders and colour options of the upcoming device. Further, he said that the phone will make its debut in Southeast Asian markets this month.

As per the leak, Oppo A95 will come with a hole-punch display. There will be a vertical triple camera setup on the back. The left side of the phone has the volume rockers and the power button.

In addition, the Oppo A95 4G will come in Glowing Starry Black and Rainbow Silver colour options. The leak has not revealed any details about any information on the specs of the A95 4G.

Oppo A95 4G was recently spotted on the popular benchmarking website, Geekbench. The listing revealed that the smartphone will be powered by an octa-core processor clocked at 1.80GHz. In addition, the phone will pack Snapdragon 662 chipset. It also shows that the SoC is equipped with the Adreno 610.

Moving on, the listing also revealed that the phone runs on the Android 11 operating system. The phone has received 312 points in the single-core test and 1274 points in the multi-core test. The device is loaded with 8GB of RAM. However, there might be more RAM variants when it launches.

The Oppo A95 4G will pack a 5,000mAh battery with 33W fast charging support as per earlier leaks. In addition, the phone will run ColorOS 11.1, and it will be equipped with a triple camera unit. However, apart from this, the other key specifications of the phone like camera sensors, display size, and design details, are not known.