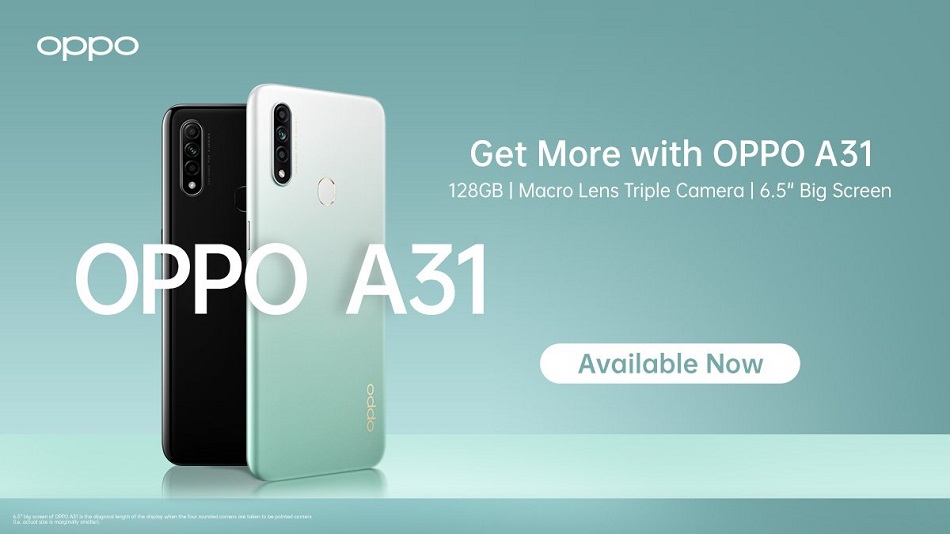 The Oppo A31 smartphone comes loaded with MediaTek Helio P35 chipset, paired with 4GB of RAM and 128GB of internal storage.

Oppo has added a new A-series smartphone in its portfolio, which is named as Oppo A31. Company has launched Oppo A31 smartphone in Indonesian market yesterday at a price tag of Rp 2,599,000 (approximately Rs 13,524.88) and will be available on fash sales through various online stores, named JD.ID, Lazada, Blibli, Tokopedia, Akulaku, and Shopee. Moreover, the company will also be selling Oppo A31 smartphone via Oppo Store and other local retailers in the future.

Jumping straight to specifications, Oppo A31 features a 6.5-inch HD+ waterdrop display (1600 x 720 pixels) with screen ratio of 20:9 and comes loaded with MediaTek Helio P35 chipset, paired with 4GB of RAM. The Smartphone has 128GB of internal storage, with an option to expand the storage via microSD card.

For the optics, the Oppo A31 comes with triple rear camera setup with the combination of a 12-megapixel as a primary lens, a 2-megapixel portrait lens, and another 2-megapixel macro lens. On the front, it has an 8-megapixel selfie sensor.

The smartphone comes with a rear mounted fingerprint sensor, that claims to open the device within 0.47 seconds. Oppo A31 gets its juices from a 4,230 mAh battery, which claims to provide 14 hours of video streaming for and 7 hours of gaming time. Moreover, the smartphone runs on Android 9 opreating system and comes loaded with all standard connectivity options.