Here’s our report card for OnePlus for 2021 where we analyse what the brand did bang on and where it missed its shot. 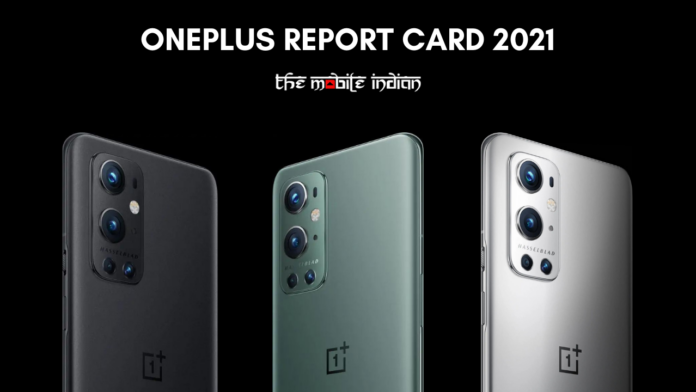 OnePlus is one of those Chinese smartphone brands that has seen a lot of ups and downs since it arrived in India 8 years ago. However, in 2021, the brand went through a significant overhaul and had some announcements that got mixed responses. So how well did it do in 2021, and where did things go sideways for the brand? Let’s answer these questions in our Report Card 2021 series where today, we are analysing everything OnePlus went through during this year.

OnePlus in 2021 showed how much importance India holds for its products as it expanded its portfolio quite a lot which is a major hit for the company. They not only introduced an India-exclusive 9 series smartphone (OnePlus 9R), but also launched three Nord series devices so consumers had the choice to buy a OnePlus device in both mid-range and flagship segment.

OnePlus expanded its portfolio and expanded its target demographic consumers with its Nord series. Where it was unclear with the original OnePlus Nord as to whom it’s for, the Nord 2 and Nord CE clearly have good positioning and mostly appeal to students who are looking for a stylish yet high on performance device.

Further, OnePlus had clearly mentioned in the past that it won’t be entering the budget-segment and will primarily operate in mid-range and flagship space where it can provide value for money smartphones to the consumers. This year also, OnePlus stuck to its words and launched devices only in two segments which we think is a good move by the brand.

As for the misses in our Report Card for OnePlus, we felt that it made a mess of its software which was appreciated in the past for its originality and close-to-stock feel and features. The new software that came with the ColorOS codebase was buggy especially for the OnePlus 9 and 9 Pro. The new software also looked like a ColorOS clone and was no more OxygenOS.

Another miss we felt was that OnePlus expanded its range so much that its focus started shifting into other spaces making it a bit difficult for the brand to keep up. Earlier, the brand used to follow the scheme of one-phone-at-a-time and did well with it because all of its focus was on one or maximum two phones, resulting in good service and updates.

Furthermore, because of its merger with Oppo, the consumers got confused towards the end of the year if they were buying a OnePlus device or an Oppo phone because OnePlus weren’t efficient in communicating as to what is happening and why it’s happening with regards to Oppo.

Out of the 6 smartphone models launched this year, we feel these were the top 3 smartphones from OnePlus in 2021:

The OnePlus 9R comes in at 3rd because of it being a value for money proposition and the fact that it was advertised as a gaming smartphone and stood strong with its claims.

With OnePlus 9 Pro, the brand proved what its capable of. It partnered with Hasselblad and gave a lot of camera features that were unique to the 9 series. Moreover, it had everything a flagship needs, including stereo speakers, great haptics, curved display, excellent performance, and much more.

OnePlus Nord 2 was the best smartphone launched by OnePlus this year that came with the same camera sensor as the flagship OnePlus 9 but in the mid-range, and also had great looks for the price. ItAs a result, itttracted youngsters and later in the year gave another interesting design option with the OnePlus Nord 2 Pac-Man Edition that came with a glow-in-the-dark rear panel.

With OnePlus, here’s where we end our Report Card 2021 series for brands. OnePlus gave us a lot of good options these year to choose from and with the OnePlus 10 series just a few weeks away, it will be interesting to witness what OnePlus holds for us in the future.