OnePlus 6T will sport 3500mAh battery with VOOC fast charging support. In terms of software, the smartphone will ship with OxygenOS based on Android 9.0 Pie out of the box.

OnePlus is working on its upcoming OnePlus 6T smartphone which is expected to launch next month on October 17. Now full specs of OnePlus 6T have surfaced online as the smartphone has been listed online on a shopping website, Giztop.

As per the listing, the OnePlus 6T will feature a 6.4-inch AMOLED waterdrop notch display with a 1080 x 2340 pixels and a 91.5 percent screen-to-body ratio. It will be powered by Qualcomm Snapdragon 845 SoC with Adreno 630 GPU. It will come in various variants – 6GB/ 8GB of RAM and 64GB/128GB/256GB of internal storage. Like all previous OnePlus smartphones, the 6T will also not include a microSD card slot for further expansion. 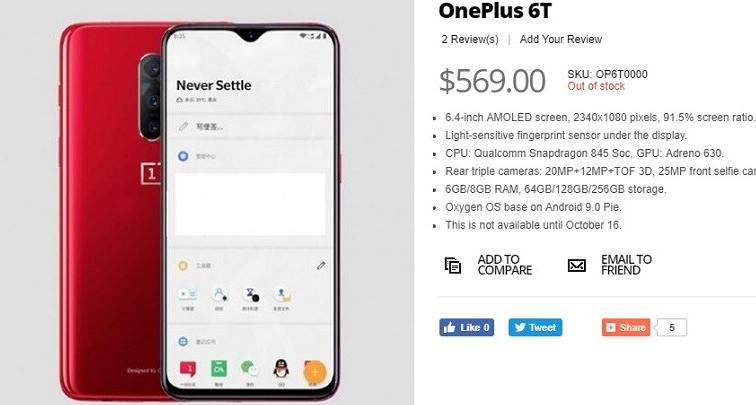 The OnePlus 6T will have a triple-camera setup with 20-megapixel, 12-megapixel and time-of-flight (TOF) 3D sensors. For the front, it will have a 25-megapixel camera. The smartphone will feature a ‘light sensitive’ under-display fingerprint sensor.

The Giztop listing suggests that the OnePlus 6T will sport 3500mAh battery with VOOC fast charging support. In terms of software, the smartphone will ship with OxygenOS based on Android 9.0 Pie out of the box.

Along with the specifications, the Giztop listing also mentions the price of OnePlus 6T. The smartphone is priced at $569 (approx. Rs 41,400) but it has not mentioned the variant. The OnePlus 6T is currently listed as “Out of Stock” on Giztop and it says that the smartphone will not be available until October 16.