This one also has the Hasselblad tuned cameras. 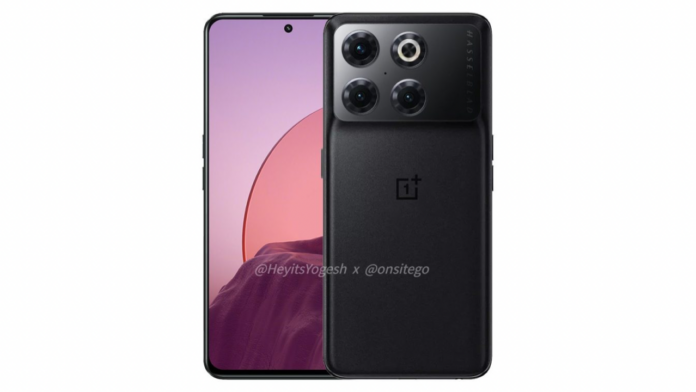 A OnePlus smartphone codenamed Ovaltine is already being tested and it is supposed to launch soon in India. Ahead of the launch that could take place next month, the renders for the OnePlus 10 (or 10T 5G) have now been leaked which give us a first look at the upcoming OnePlus flagship.

The renders come from the same tipster who leaked details about the ‘Ovaltine’ project and that’s Yogesh Brar. He collaborated with Onsitego to leak the renders of the device which show us that the OnePlus 10/10T 5G will have a Hasselblad-tuned camera and a camera layout similar to the OnePlus 10 Pro. Furthermore, it will have triple rear cameras inside a module that emerges from the curved frame of the smartphone.

While it isn’t identical to the OnePlus 10 Pro, the camera layout does look similar due to the placement of the circular rings. The camera module of the OnePlus 10/10T 5G covers the entire width of the phone. It has the power button on the right and volume buttons on the left. On the front, it has a 6.7-inch AMOLED display with Full HD+ resolution and a 120Hz refresh rate. The front-facing camera is embedded inside a punch-hole placed towards the top-centre portion.

Apart from that, the leaked specifications say that OnePlus switched from the Dimensity 9000 processor to the recently unveiled Snapdragon 8+ Gen 1 as a ’last-minute change’ for the upcoming flagship.

Interestingly, OnePlus has equipped this phone with 150W fast charging, which stands superior to the OnePlus 10 Pro’s 80W fast charging support. However, the upcoming phone misses out on wireless charging. It is backed by a 4,800mAh battery and features an in-display fingerprint reader and stereo speakers. Lastly, it is still unclear whether this phone will be marketed as OnePlus 10 or OnePlus 10T 5G.