Nokia Asha 501 was an inexpensive smart feature phone meant for those who wish to have a good looking device but at an affordable price. Now Nokia is reportedly working on a new mobile phone in the Asha series, called Asha 502. As per the image leaked by Evleaks on Twitter, the Nokia Asha 502 is almost nearing its official launch and while the devices offer the same great look and feel as the older Asha 501, it has upgraded hardware.

The Nokia Asha 502 is said to have a Fastlane feature which allows users to access applications that they use the most and the latest images they have captured and their social network updates with a simple swipe. The Nokia Asha 502 is likely to get a 3.2 or 3.5 inch display with capacitive touch and a toughened glass based scratch resistant screen as compared to 3 inch display of Asha 501. 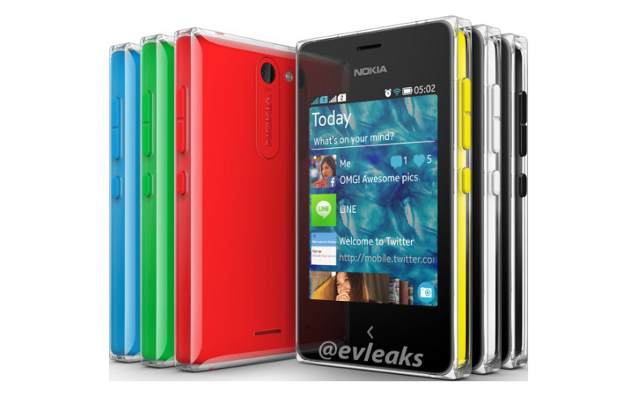 The Asha 501 came with EDGE cellular data connectivity along with WiFi and Bluetooth for wire free connectivity as well. But the Asha 502 is likely to be a 3G device with the option of a Dual SIM. It is also said to feature a 3 megapixel camera at the back along with an LED flash for better illumination.

Along with that Nokia also seems to be planning to bundle a polycarbonate case along with the device as the one showed in the image as well. This will be a clear plastic case that will protect the device form scratches and damage while will not obstruct the view of the colorful device.