Nokia 3 vs Xiaomi Redmi 4: Who will be the next budget king? 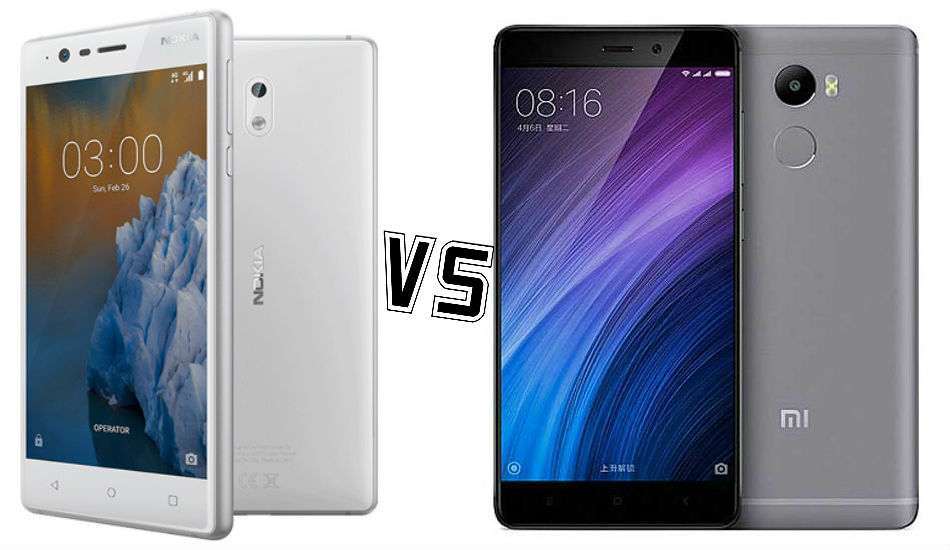 Let’s find out if Nokia 3 can stand against the likes of Redmi 4.

HMD Global has finally launched Nokia 6, Nokia 5 and Nokia 3 smartphones for the Indian market. The Nokia 6 and Nokia 5 are priced at Rs 14,999 and Rs 12,899 respectively and are meant to compete in the mid-range segment, Nokia 3, which is priced at Rs 9,499 is targeted at the budget segment.
Though Nokia 3 is available through offline channels, it will face a stiff competition with Xiaomi’s Redmi 4 which comes with a starting price of Rs 6,999. The Redmi 4 has already proven its mettle by offering some of the best specs at an affordable price point. Let’s find out if Nokia 3 can stand against the likes of Redmi 4, which is the successor to probably one of the most successful budgets oriented Android smartphones.
Design and Display
Starting with the design part, both the smartphones give a distinct look. On one hand, Xiaomi Redmi 4 boasts a metal unibody and looks eerily similar to Redmi Note 4, while on the other hand, Nokia 3 has its resemblance to older Nokia handsets, which is not a bad thing. However, the latter sports a plastic build, while the former has an advantage with a metal build.
However, Nokia 3 is sleeker with 8.5mm thickness than the Redmi 4 (8.7mm thickness), while Redmi 4 is more compact with being just 70mm tall than Nokia 3 (71.4mm tall). If you get to choose between the two, then we will go with the Xiaomi Redmi 4 as it comes loaded with a metal design and is compact than Nokia 3.
Coming to the display department, both the smartphones sports a 5.0-inch Full HD display with a screen resolution of 1280 x 720 pixels and both of them are protected with Corning Gorilla Glass protection. However, Redmi 4 has a better screen-to-body ratio (70.7 percent) as compared to Nokia 3 (67.3 percent). But, we are going to call it a tie, as both of them, has a similar screen size and resolution.
Hardware and Software
This is where it gets interesting. The Nokia 3 is powered by a quad-core MediaTek MT6737 processor along with Mali-T720MP2. The phone is backed by a 2GB of RAM and 16GB of internal storage, which can be further expanded up to 256GB via micro SD card slot.
Xiaomi Redmi 4 is powered by the latest octa-core Qualcomm Snapdragon 435 processor along with Adreno 505 GPU. The phone comes loaded with different RAM and storage configurations including 2GB + 16GB for Rs 6,999, 3GB + 32GB for Rs 8,999 and 4GB + 64GB RAM for Rs 10,999. However, it is too early to comment on the computing power of the Nokia 3, but looking at the sheer specs sheet, Xiaomi Redmi 4 emerges as a clear winner as it sports a better processor and one has a host of options to choose from.
On the software front, the Nokia 3 runs on the latest Android 7.0 Nougat, which has a stock experience. On the other hand, the Xiaomi Redmi 4 runs on a dated Android 6.0.1 Marshmallow with company’s MIUI 8 running on top of it. Overall, it all boils down to the consumer’s preference as both the smartphones offers different flavours of Android.
Camera
On the camera front, Nokia 3 has a combination of 8-megapixel cameras on both front and back with f/2.0 aperture, 1.12-micron pixel size along with LED flash at the back and display flash at the front.
The Xiaomi Redmi 4 also comes with the 13-megapixel rear camera with LED flash, PDAF, f/2.0, a 5 element lens, full HD recording, with real-time filter and on its front, it has a 5-megapixel front camera with f/2.2 for selfies and video chats.
Now based on the megapixels, Xiaomi Redmi 4 might have the upper hand with its 13-megapixel rear facing camera sensor, though Nokia 3 emerges as a winner with its 8-megapixel front-facing camera. However, megapixels never reveals the entire story, in fact, it is just a number. What matters is the image processing and the camera sensor used inside the device which is what will decide who, amongst these two, comes out as the winner.
Battery and Connectivity
On the battery front, the Nokia 3 is juiced up by a 2650mAh battery, while the Xiaomi Redmi 4 boast a massive 4100mAh battery. Once again, Xiaomi Redmi 4 emerges as a clear winner with a better battery backup.
Lastly, for connectivity, both the devices support Micro USB (USB 2.0), USB OTG, Bluetooth, WiFi, GPS etc. Xiaomi Redmi has an advantage of a fingerprint sensor, while Nokia 3 comes with NFC.
Wrapping Up
To wrap up, both the smartphones have given a stiff competition to each other. Though Xiaomi Redmi 4 has a better processor, battery backup and slightly more compact design, Nokia 3 is sleeker and runs on the latest Android version and has a better selfie camera ( on paper). Both of them looks promising, and it would be interesting to see whether Nokia 3 will give a stiff competition to Xiaomi Redmi 4 or not.