Motorola had launched Moto M smartphone with model number XT1662 in India in November last year. Now Moto M with the same model number has been spotted on GFXBench benchmarking website with a slightly different specs, as per a report.

As per the listing on GFXBench, the new Moto M has a 4.6-inch full HD display with 1920×1080 pixels resolution and 5 finger gesture support. It is powered by 2.1 GHz octa-core processor with either MediaTek MT6755 (Helio P10) or a MediaTek MT6755T (Helio P15) and 4GB RAM. It offers 32GB of internal storage out of which 24GB will be reserved for the users. Besides, it has Mali-T860 GPU and Helio P10 model is running on Android Marshmallow whereas the Helio P15 variant is running on Android Nougat operating system. 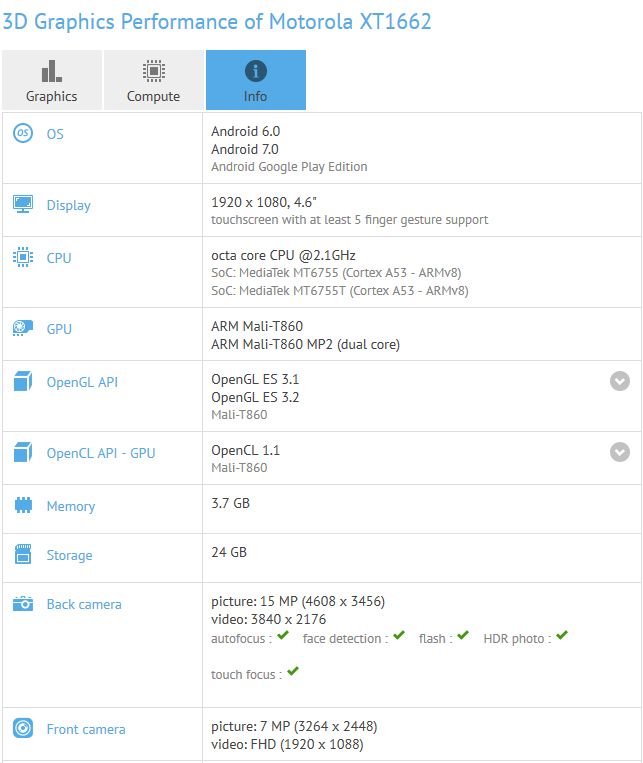 The smartphone has a 16-megapixel autofocus camera and a LED flash on its rear panel while a 7-megapixel camera in its front. The GFX listing shows that the device has connectivity features like Bluetooth, GPS and WiFi. As per the listing, the device has an accelerometer, gyroscope, light sensor and proximity sensor as well.

Just yesterday, it was revealed that the company is working on the successor of Moto M which is named as Moto M2 and the smartphone is said to be launched this year in October 2017. The phone will come in two variants – 4GB RAM with 32GB internal storage and 6GB RAM with 64GB internal storage. It will be featuring 5.5 inches full HD display just like the original Moto M and will be powered by cutting edge MediaTek processor.