Moto E40 has been launched in the E series in India today for the sole 4GB + 64GB version. It comes in Carbon Gray and Pink Clay colours. 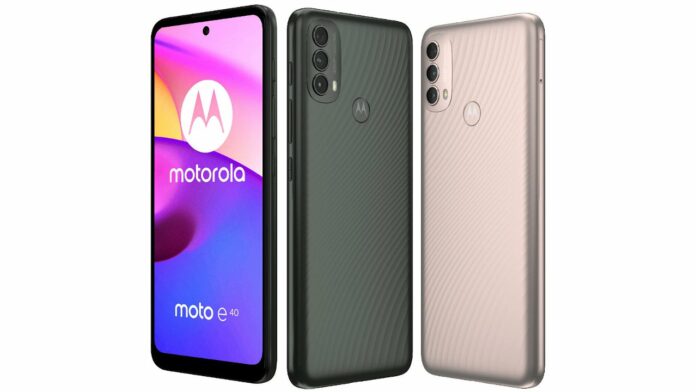 Motorola has launched Moto E40, the company’s latest smartphone in the E series in India. The device comes with 90Hz display, an octa-core Unisoc T700 SoC, a triple camera setup, a 5000mAh battery with fast charging and more.

Let’s take a detailed look at the handset’s specs, price, and availability in India.

The Moto phone is priced at Rs 9,499 for the sole 4GB + 64GB version. It comes in Carbon Gray and Pink Clay colours.

The phone will be available from Flipkart starting October 17th.

Moto E40 features a 6.5-inch HD+ display with 720 x 1600 pixels resolution. In addition, the display has a 90Hz refresh rate and a punch-hole at the center to house a selfie camera. It packs a 5,000mAh battery which Motorola touts to last for two days.

The handset also has a dedicated Google Assistant key at the right side. Connectivity features include dual SIM support, Wi-Fi 802.11 b/g/n, Bluetooth 5.0, GPS, a USB-C port, a 3.5mm audio jack.

Earlier, Motorola launched Motorola Edge 20 Pro in India. The phone is priced at Rs 36,999 for the sole 8GB of RAM and 128GB of storage variant. The phone includes Snapdragon 870 processor, 108MP triple-camera setup, 4500mAh battery and more. It comes in Iridescent Cloud and Midnight Sky colours.