Motorola has launched Moto E and Moto E4 Plus smartphones globally this month.

Recently, we learnt that Motorola is expected to launch Moto E4 Plus soon in India. Now seems like Moto E4 smartphone is also heading for launch in India soon, as per a Mumbai-based mobile phone retailer. Mahesh Telecom today revealed on Twitter that Moto E4 is coming soon in India and its approximate price would be Rs 8,500 – Rs 8,700. 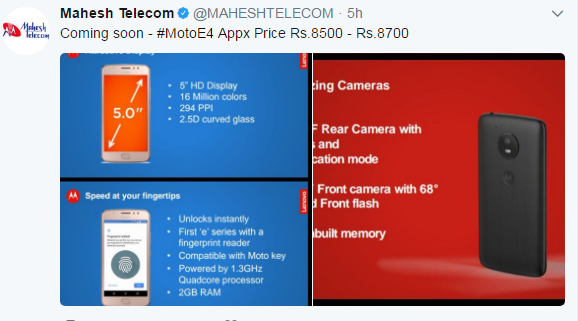 The major highlight of the devices is the impressive battery backup coupled with some interesting internals, all at the very affordable price tag. Both these smartphones have a metal body, water-repellant nanocoating, a fingerprint sensor embedded inside the home button up and run Android 7.1 (Nougat) operating system. However, there is no information about the Indian launch and availability, but one can expect it real soon.

Jumping straight to the specifications, the Moto E4 Plus features a 5.5-inch (1280 x 720 pixels) HD 2.5D curved glass display and is powered by a 1.4GHz Quad-Core Snapdragon 427 processor with Adreno 308 GPU. The phone is backed by a 2GB of RAM and has a 16GB/32GB of internal storage, which can be further expanded via microSD card slot.

On the camera front, the device sports a 13-megapixel rear camera with LED flash, aperture f/2.0 and 5-megapixel front-facing camera with LED flash, f/2.2 aperture for selfies and video calling. The phone runs on the latest Android 7.1 Nougat and comes loaded with an impressive 5000mAh battery. On the connectivity front, it supports 4G VoLTE, WiFi 802.11 b/g/n, Bluetooth 4.1, GPS and micro USB port. It measures 155x 77.5x 9.5 mm and weighs 182 grams.

Coming to the smaller, Moto E4, the device sports a 5-inch (1280 x 720 pixels) HD 2.5D curved glass Full lamination display with 70% NTSC colour gamut. It is powered by a 4.4GHz quad-core Snapdragon 425 processor with Adreno 308 GPU along with 2GB RAM, 16GB internal storage and an option of expandable memory with microSD.