Motorola has recently launched Moto C and Moto C Plus in India for Rs 5,999 and Rs 6,999 respectively. Now seems like the company is all set to launch its another new smartphone in India, which is probably as per reports is Moto E4 Plus. The company has started teasing the launch of the upcoming smartphone on its official Twitter handle without revealing the actual name of the smartphone.

“A dead phone is the modern-day shortest horror story. We will ensure you don’t feel #Powerless again. What’s coming next? #StayTuned” reads the company’s latest tweet. Along with the tweet, the company has also shared a photo for showing a dead battery with tagline Oops!. 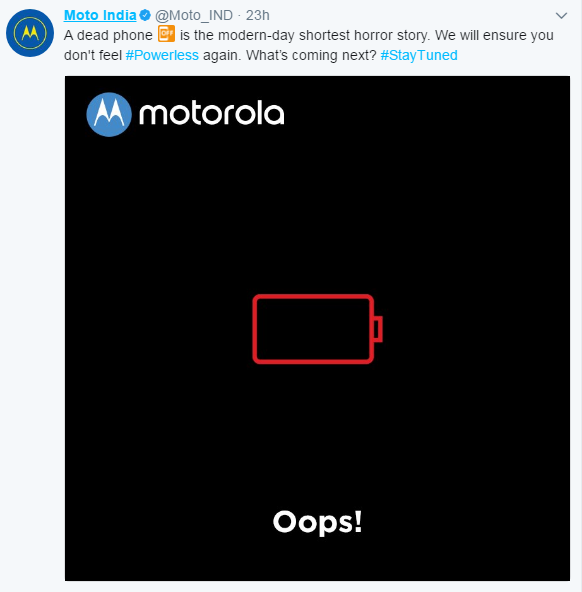 The Moto E4 Plus features a metal-body and 5.5-inch (1280 x 720 pixels) HD 2.5D curved glass display and is powered by a 1.4GHz Quad-Core Snapdragon 427 processor with Adreno 308 GPU. The phone is backed by a 2GB of RAM and has a 16GB/32GB of internal storage, which can be further expanded via microSD card slot. There is a fingerprint sensor embedded inside the home button on the front of the device.

On the camera front, the device sports a 13-megapixel rear camera with LED flash, aperture f/2.0 and 5-megapixel front-facing camera with LED flash, f/2.2 aperture for selfies and video calling. The phone runs on the latest Android 7.1 Nougat and comes loaded with an impressive 5000mAh battery. On the connectivity front, it supports 4G VoLTE, WiFi 802.11 b/g/n, Bluetooth 4.1, GPS and micro USB port. It measures 155x 77.5x 9.5 mm and weighs 182 grams.