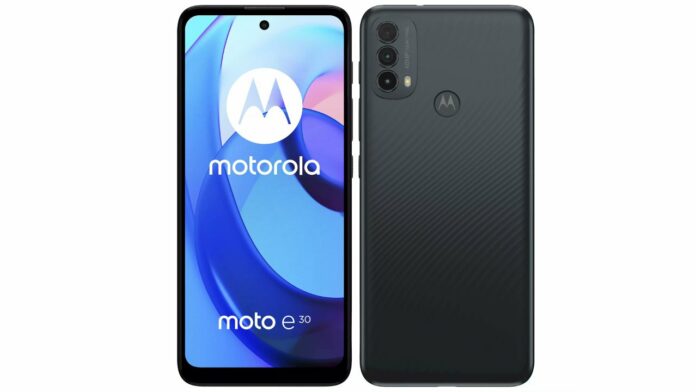 Motorola is all set to launch the Moto E40 in India soon. Now the company is also working on a cheaper version of this smartphone called Moto E30. The renders of the upcoming Motorola phone has now leaked online.

Popular leakster Roland Quandt (@rquandt) has shared the press renders of the upcoming Motorola Moto E30. The renders have revealed the design of the phone.

As per the renders, the phone will come with a centered punch-hole display on the front. At the rear, there will be a vertically aligned 48MP triple camera setup. The back also features a fingerprint sensor placed under the company’s batwing logo.

The right side of the device has a power key as well as a volume rocker. Further, there’s a SIM card slot on the left side. The bottom side has a single speaker grille, a USB Type-C port, and a microphone hole. Finally, the top has a 3.5mm headphone jack.

Meanwhile, the Moto E40 has been teased to launch in India soon. The Moto E40 will feature a 6.5-inch HD+ display with 720 x 1600 pixels resolution. In addition, the display will have a 90Hz refresh rate and a punch-hole at the center to house a selfie camera.

The phone will pack Unisoc 700 chipset. This will be coupled with 4GB of RAM and 64GB of onboard storage. In addition, the device will run Android 11 out of the box on the software side.

There will be a 48MP primary camera, a 2MP macro lens, and a 2MP depth camera. In addition, at the front, the phone will feature an 8MP selfie camera.