The Moto C, bearing a model number XT1750, has been certified by the Bluetooth Special Interest Group.

Lenovo-owned Motorola is working on a plethora of smartphones including the entry-level series known as Moto C and Moto C Plus. Both the smartphones have been subjected to various leaks in the past and now the smaller sibling, Moto C, has finally received a Bluetooth certification.
The Moto C, bearing a model number XT1750, has been certified by the Bluetooth Special Interest Group. Usually, the Bluetooth and Wi-Fi certifications add some concrete evidence confirming that the smartphone will soon get launched. And same is the case with this one. The device will come loaded with Bluetooth 4.2 and the certification also hints that the smartphone will be powered by a MediaTek processor, which is in line with previous rumours. 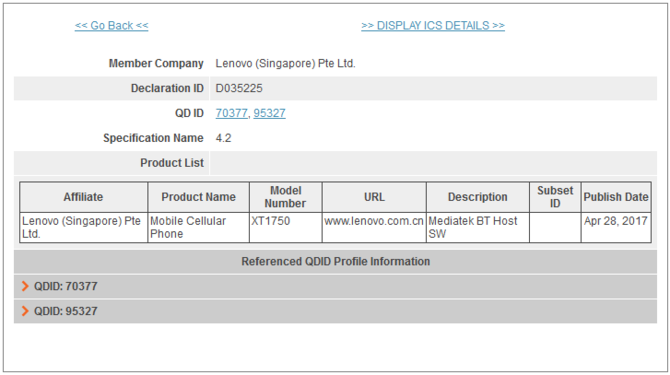 Earlier, the Moto C and Moto C Plus were reported to run on the latest Android 7.0 Nougat and will share the same 5-inch display, as we have seen in the case of Moto G5 and Moto G5 Plus, however, the Moto C Plus will come with a 720p resolution, while the Moto C will feature an FWGA resolution of 850 x 480.
The Moto C would come in two variant, one with 3G connectivity, while the other sporting a 4G support. The Moto C 3G will be powered by a 32-bit quad-core processor, clocked at 1.3GHz, while the 4G variant will boast a 64-bit processor slightly underclocked at 1.1GHz. Both the variants will sports a 1GB of RAM and could be loaded with either 8GB or 16GB of internal storage, depending upon the region.
On the camera front, the Moto C will boast a 5-megapixel rear camera with flash (fixed-focus on 3G, auto-focus with 4G), along with a 2-megapixel front-facing camera with selfie flash as well. Further, both the variants will be powered by a 2350mAh battery.
Meanwhile, the Moto C Plus will be strictly a 4G LTE-enabled device, the report adds. The major highlight of the device would be the 4000mAh battery. The smartphone is expected to be powered by a 64-bit quad-core MediaTek processor clocked at 1.3GHz. The device will be backed by 1GB/2GB RAM, depending upon the region while it will feature a 16GB internal capacity, with an expandable storage option via microSD card. On the camera front, Plus variant will come loaded with an 8-megapixel rear camera and 2-megapixel front facing camera with rear and front flashes.
Source