Xiaomi Mi MIX 4 launch date has been announced by the company. The phone will be launching on August 10 in China and will have in-screen camera. 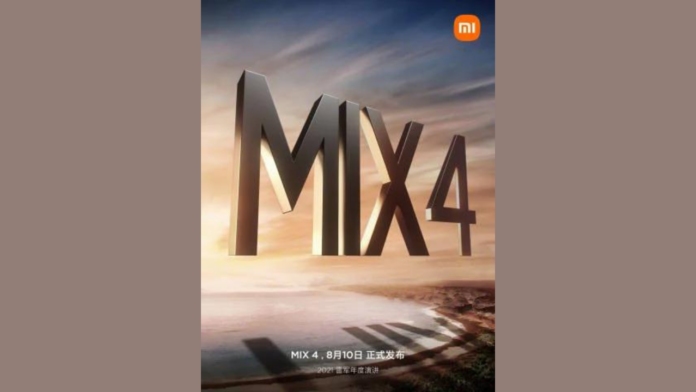 Xiaomi has finally announced the launch date for what is likely going to be the first phone from the brand to have an in-screen camera. The Mi MIX 4 launch is now set for August 10 in China, as the company has announced.

The announcement was made through Weibo via Xiaomi’s official account. Along with the Mi MIX 4, we may also witness the launch of the Mi CC11 series, Mi Pad 5 lineup, and MIUI 13. Interestingly, Xiaomi recently confirmed that Mi MIX 4 will not boot MIUI 13 but will come with MIUI 12.5.

As per earlier leaks, the phone will launch with 8GB and 12GB RAM options. In addition, both variants will have 256GB of internal storage. The device will most likely support 5G, considering it’s one of the top-of-the-line devices from Xiaomi. The Mi MIX 4 could pack a 5,000mAh battery.

The company is also working on overcoming the limitations of the under-display camera tech, including reduced picture quality or a less pleasant display viewing experience.