This is the first time Meizu is participating in the event and is expected to unveil a smartphone with high processing speed.

Chinese handset manufacturer Meizu has scheduled its press event on February 28 which is the second day (for the public) at the Mobile World Congress (MWC) 2017. The MWC event is scheduled to be held later this month from Febraraury 27 to March 2 in Barcelona, Spain and the company has already started sending the invitations for its press conference.

Sadly, the invite does not reveal much information about the devices to be unveiled at the event. However, it comes with a tagline “Faster than ever” along with a graphic which resembles a charging ‘sign’ which is why we assume that this might have something to do with the fast charging technology. We would also like to inform our readers that this is Meizu’s first appearence in the MWC event. 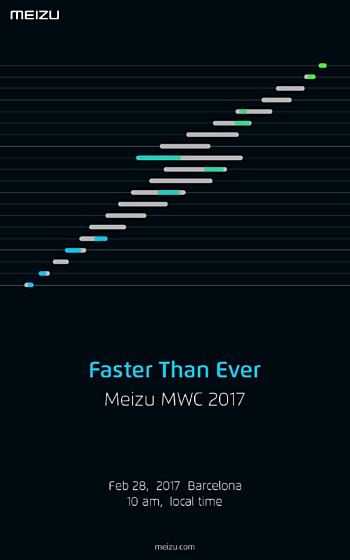 The M5s comes with a metal body and features a 5.2-inch HD (1280 x 720) IPS 2.5D curved display. It is powered by a 64-bit MediaTek octa-core processor clocked at 1.5GHz, which is clubbed with 3GB of RAM, and 16/32GB of internal storage. The phone supports MicroSD card up to 128GB. The smartphone runs Android 6.0 Marshmallow wrapped under Flyme OS.

The Meizu M5s get its strength from a 3000 mAh battery and comes with mCharge 18W fast charging technology which as per company can charge the Meizu M5s from 0 to 19 percent in 10 minutes. On the camera front, it has a 13-megapixel shooter with dual colour LED flash, PDAF, 5P lens and ƒ/2.2 aperture and on the front, it has a 5-megapixel camera for selfies and video calling. The smartphone houses an (mTouch) fingerprint scanner, which is integrated into the home button. This smartphone supports 4G network with VoLTE and offers Hybrid Dual SIM, WiFi (802.11 a/b/g/n), Bluetooth 4.2, and GPS. The smartphone measures 147.28 x 72.8 x 8.15 mm and weighs 138 grams.