LG V60 ThinQ will be powered by Qualcomm Snapdragon 865 processor

LG is currently working on its V60 ThinQ flagship smartphone. The phone was rumoured to go official later this month at the Mobile World Congress (MWC) event which is now canceled. Now LG V60 ThinQ has surfaced on GeekBench. The model number featured on the Geekbench site is the LM-V600N.

According to the GeekBench listing, LG V60 ThinQ will be powered by Qualcomm Snapdragon 865 processor coupled with 8GB of RAM. In addition, the listing also shows that the phone will run on Android 10 operating system out-of-the-box. The LG phone has received a single-core score of 898, while its multi-core score comes at 3266, as per the Geekbench listing. 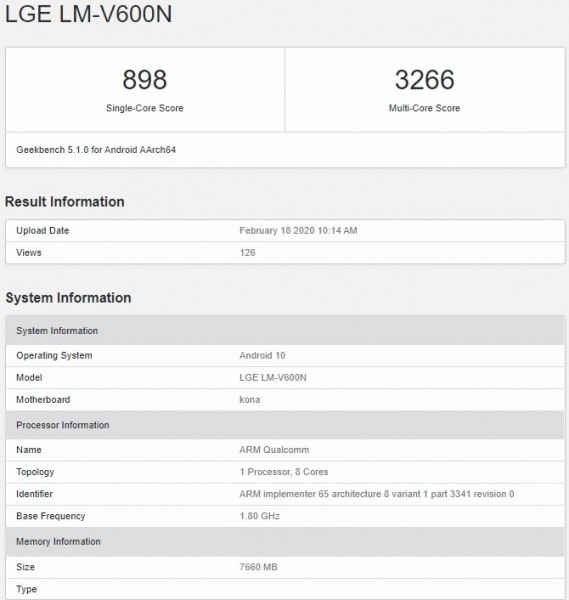 The GeekBench listing does not reveal any specifications of the V60 ThinQ 5G. A render of the showing the back panel of the upcoming smartphone already leaked online earlier this month.

The LG V60 ThinQ will feature camera aligned horizontally. The phone is likely to feature a quad-camera setup. There is no cut-out for the fingerprint scanner which suggests that the phone will feature an in-display fingerprint sensor.