It has already been confirmed that Lenovo Z6 Pro smartphone will be launched on April 23rd at an event in China. Now ahead of the phone’s launch, 5G support for the phone has been revealed online.

Lenovo’s executive Chang Chenghas confirmed that the smartphone will come with support for 5G connectivity by posting a screenshot of the phone’s network icons on his Weibo account. The post shows Lenovo Z6 Pro’s network icons with one being 4G and the other with 5G connectivity. If this is true, then the Z6 Pro will be the brand’s first 5G smartphone. 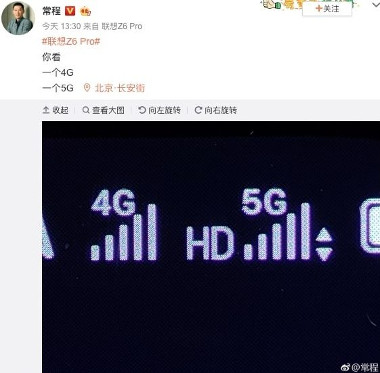 It was earlier confirmed that the Lenovo Z6 Pro will come equipped with Snapdragon 855 chipset.Further, the smartphone would have a Hyper Vision camera, which is said to capture 100-megapixel shots using software enhancements.

Moreover, the smartphone is expected to have an in-display fingerprint sensor, wireless charging support, large rear camera sensor, metal frame and a glass back. The smartphone is said to run on Android 9.0 Pie OS. The Lenovo Z6 Pro is expected to feature a notchless display with either a slider design or an elevating front camera.