The listing reveals some of the key specifications of the LeEco's upcoming flagship smartphone.

A new high-end LeEco smartphone bearing quad camera setup has been spotted on GFXBench website. The smartphone comes with a model name ‘LeTV LeEco X10 (X85x)’ and the listing reveals some of the key specifications of the LeEco’s upcoming flagship smartphone. 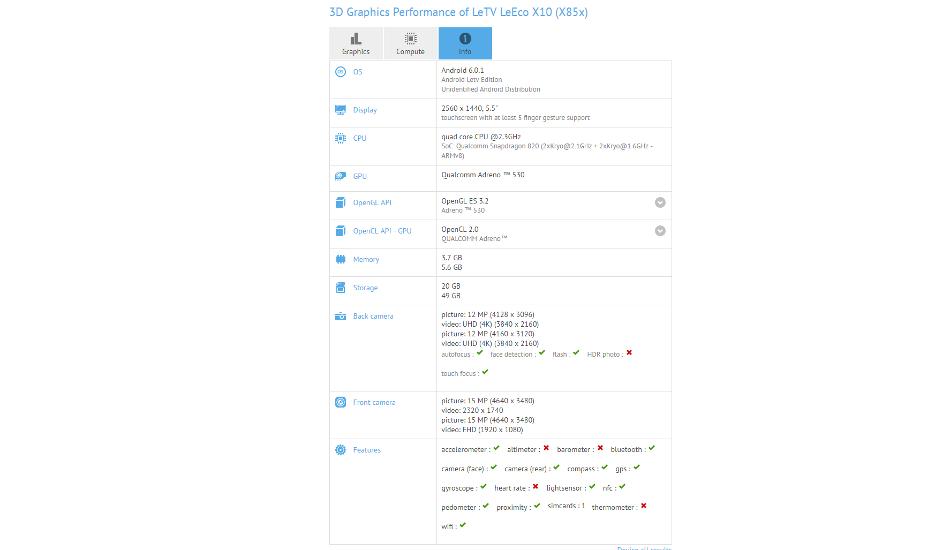 Further, as per the listing, the LeEco X10 features a 5.5-inch QHD display with aresolution of 2560 x 1440 pixels. Underneath, it is powered by a Qualcomm Snapdragon 820 quad-core processor, along with Qualcomm Adreno 530 graphic processor. The smartphone has two variants- 4GB RAM with 32GB of internal storage and a 6GB of RAM with 64GB of internal storage variant. The smartphone runs on Android 6.0.1 Marshmallow operating system and offers Bluetooth, GPS, WiFi, Accelerometer, Digital compass, Gyroscope, Light sensor, Pedometer, and Proximity sensors for connectivity and sensors.

A couple of months back another high-end device with a model name LeEco Le X850 was spotted on TENNA. As per the listing, the LeEco Le X850 featured a 5.7-inched QHD display with a resolution of 2560×1440 pixels. The listing also revealed that the device comes equipped with 2.342GHz Snapdragon 821 processor paired with Adreno 530 GPU, 4GB of RAM and 64GB of internal storage. The smartphone runs on Android 6.0.1 Marshmallow operating system and is backed up by a powerful 3900mAh battery. The Le X850 flaunts a 13-megapixel dual rear camera setup and a 16-megapixel front-facing camera for photography