Lava and Micromax launched only a few phones in 2021 as their portfolio remained limited throughout the year. But how did it perform even with limited launches? 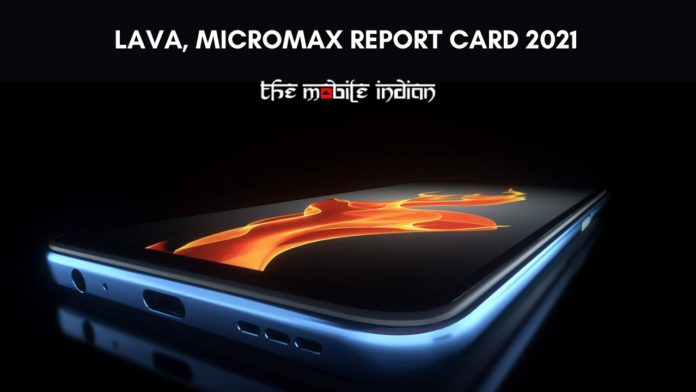 Lava and Micromax were the only Indian brands this year that launched smartphones and made their presence felt. So let’s take a look at what Lava and Micromax did this year and did it go as planned in our Report Card series of 2021.

Where Lava launched seven smartphone models, Micromax launched only two devices this year. Out of the seven devices Lava launched, six devices were launched under Rs 15,000, while one was launched between Rs 15,000 to Rs 30,000.

As for Micromax, four devices included the sub-variants of the two smartphones launched. All four of these smartphones were launched under Rs 15,000.

One of the hits for both brands is that they were active in the market despite having a minimal product portfolio compared to other brands. As a result, their market share may not have increased, but the brands are still operating. They are trying to provide an Indian value for money offering to the consumers looking for a budget smartphone in India.

In our report card for Lava and Micromax, we felt that both the brands have sent out a strong message of survival in the Indian smartphone market that Chinese and other brands are currently dominating. Lava, in specific, tried to offer a unique smartphone to the consumers where the user could customise their device before they buy it. Moreover, both brands also focused on updating their software on time to keep up with the trend, which is worth appreciating.

As for the misses, it was felt that the brands overpromised than what they could actually offer. Specifically, Micromax, which was able to launch only two smartphones throughout the year, couldn’t keep up with its promises because of the chip shortage and failed to deliver.

Further, the whole set of Indian brands was largely missing from the scene, and there weren’t a lot of products to choose from for the consumers. This means that even if a consumer wanted to support the brand, they didn’t have an option to select a device from the company in the price segment they wanted the device to be in. Moreover, as we said, the company didn’t expand into new segments and operated in the space where it has been operating since the beginning – the budget segment.

While choosing the top 3 smartphones in our Report Card 2021 for Lava and Micromax was difficult, these were the ones we could come up with:

The Micromax In 1 was one of those devices that rode on the Anti-China sentiment and was a great option for those looking for an Indian device in the budget price segment. It had a big battery and a decent display that proved beneficial for the device.

The In 2b from Micromax is in the second position due to its strong presence in the below Rs 10,000 segment. It offered a stock android with a good display and a processor.

The Lava Agni 5G was one of the most premium smartphones from Lava this past year and was offered at a great price. It had good looks and again, a premium in-hand feels because of which it deserves the first position.

So this was it for our Report Card for Lava and Micromax in 2021. These brands did remain low-key during 2021, but it will be interesting to see what they will bring to the table in 2022 and will it work as planned by the companies.