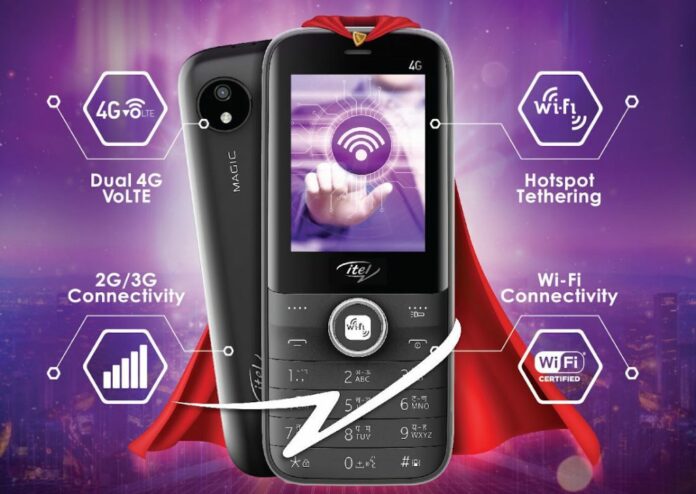 itel Magic 2 4G features a 2.4-inch QVGA Curved display with alphanumeric keys and a capacitive button at the bottom of the display

itel has launched its first 4G feature under its ‘Magic series’ – Magic 2 4G (it9210 model). The phone is priced at Rs. 2349 and comes with 100 days replacement warranty, 12 months guarantee and one-time screen replacement of a broken screen within 365 days of purchase.

The itel it9210 comes in Black and Blue colours. Users will get a handset, charger, battery, earphone, user manual, and a warranty card inside the box on purchasing the device.

It comes with support for Wi-Fi connectivity as well as Hotspot Tethering. The device can be used as a modem to share internet data with up to 8 devices.

Talking of the specifications, the itel Magic 2 4G features a 2.4-inch QVGA Curved display with alphanumeric keys and a capacitive button at the bottom of the display. It comes with 8 preloaded games for entertainment needs. There is support for nine regional languages – English, Hindi, Gujarati, Punjabi, Tamil, Telugu, Bengali, Kannada & Malayalam.

The feature phone has a 1.3MP Rear Camera with flash. It is powered by a UNISOC Tiger T117 chipset with 64MB RAM while there is 128MB storage onboard which can be expanded via a MicroSD slot up to 64GB.

Further, the device has itel mobile’s exclusive King Voice feature, a text to speech feature, the device lets consumers hear incoming calls, messages, menu, and even their phone book. The phone book can store up to 2000 contacts.

Other features onboard the phone include a dedicated LED torchlight, a One-Touch mute, an Autocall recorder to record conversations and a wireless FM with recording advantage. The phone is backed up by a 1900mAh battery that promises up to 24 days of standby time.