IQOO 8 key specifications have been revealed by the company as per which the device will come with the Snapdragon 888 Plus chipset. 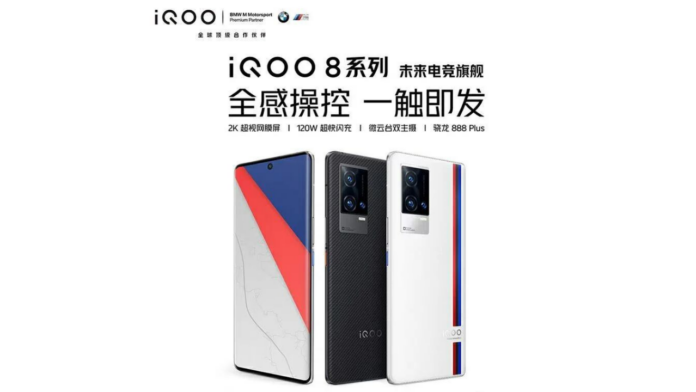 IQOO is all set to bring the next generation of its flagship smartphones, the iQOO 8 series on August 17th. The key specifications of the iQOO 8 have been confirmed by the brand. Along with that, the iQOO 8 Pro in BMW Motorsport Edition has been leaked as well.

The company confirmed on Weibo that the phone will be powered by the Qualcomm Snapdragon 888 Plus SoC. It will further have LPDDR5 RAM. The iQOO 8 series is also teased to come with UFS 3.1 storage. Additionally, a tipster on Weibo that goes by the name of Bald Panda has confirmed some other specs as well via a leak.

Per the tipster, the iQOO 8 should feature a flat display. It will have a hole-punch cut out in the top centre for housing the front camera. The phone is likely to support 120W fast charging and will be suitable for gaming. He re-confirms that the smartphone will have the Snapdragon 888 Plus chipset.

We can also see the IQOO 8 Pro may feature a curved display panel. The tipster says this panel is a 2K Retina display. He says the iQOO 8 Pro will also come with 120W fast charging support. Apart from these, the device should also get 12 GB RAM + 4 GB virtual RAM and 256 GB storage. The phone would run on Vivo’s OriginOS 1.0 based Android 11 OS. There’s no information regarding international availability of the phones as of yet.