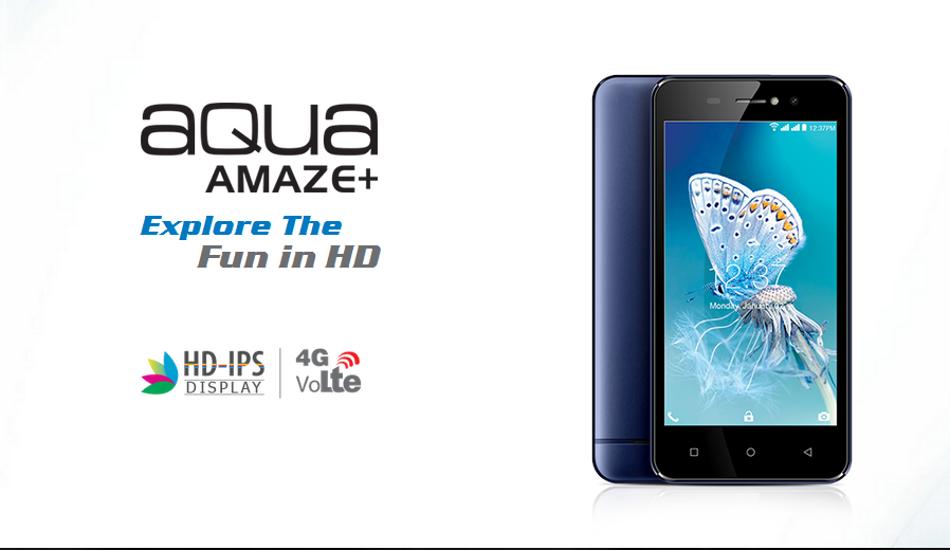 The smartphone has three colour options to choose from- Black, Blue and Grey.

After launching Cloud Style 4G and Cloud Q11 4G smartphone last week, Intex has now announced the launch of its another 4G VoLTE smartphone in India, which is dubbed as Intex Aqua Amaze+. The smartphone is priced at Rs 6,290 and will be available at Intex retail stores across India. The smartphone has three colour options to choose from- Black, Blue and Grey.

The Intex Aqua Amaze+ features a 4.7-inch HD IPS display with resolution of 720×1280 pixels and is powered by a 1.3GHz Quad-Core (SC9832A) processor. It comes with 1GB of RAM, and 8GB of internal storage, which can be further expandable up-to 32GB via micro SD card. The smartphone runs on Android 6.0 Marshmallow operating system.

The Aqua Amaze+ sports a 5-megapixel camera module with LED flash on its back as well on its front panel. The camera features include Face Beauty, Panorama, HDR, and Face Detection. The smartphone its its juices from 2000mAh li-ion battery, which claims to deliver up-to 200 hours of standby time and up to 18 hours of talktime. Besides, this 4G VoLTE enabled smartphone offers Dual SIM (Micro + Nano), WiFi, Bluetooth, GPS/AGPS, 3.5mm jack, a microUSB port, G-Sensor, P-Sensor, L-Sensor, Emergency rescue, and Smart Wake. The handset measures 139.6 x 68.8 x 9.4 mm and weighs 128 grams.

The smartphone also offers Intex’s in-house Value Added Services (VAS) as well, such as LFTY- a left screen concept, providing a seamless cohesive mix of multi-category content and value ads to the end consumer on the left screen. GamePlay, is an app for gaming, brings the best of video games for game lovers. VdioPlay – a video aggregator app that offer users access to free and premium videos in one place, the company explained these features in press note.

Commenting on the launch of Aqua Amaze+, Nidhi Markanday, director and business head, Intex Technologies, said, “At Intex, we are constantly upgrading our products and services. By launching Aqua Amaze+ we are creating a reflection of our users’ desires to meeting their needs. In this handset, we have offered a HD display quality, which will give users a high-resolution experience, making the viewing angles absolutely heavenly. We are happy to launch this 4G-enabled smartphone for our users and are confident of expanding our reach.”