iFFALCON has launched its F2A Series of televisions in India that comes in three sizes. The TV features Dolby Audio, Micro Dimming and more. 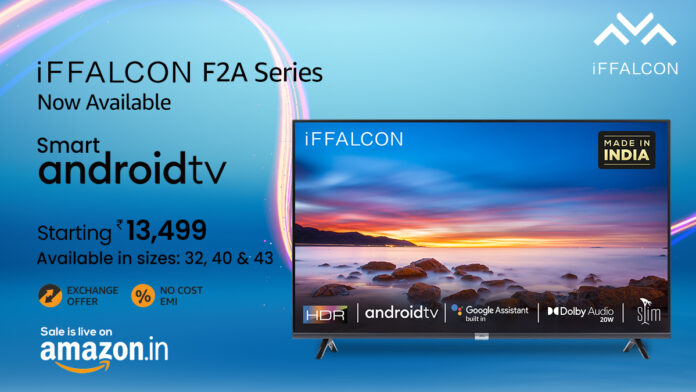 iFFALCON has today launched its F2A Series televisions on Amazon with the starting price point of Rs 13,499. The AI-powered F2A smart TV series comes with a built-in Chromecast and Google app store. The TV also features an A+ grade Full HD Panel and HDR.

The iFFALCON F2A series comes with display features like Micro Dimming and Dynamic contrast. The Micro Dimming feature analyzes the content in 512 separate zones and automatically adjusts the brightness and darkness.

The AI Technology and Google Voice Search make navigation much easier. The F2A series TVs comes with a built-in Google Assistant that allows users to access their preferred content whenever they want. The iFFALCON Voice Remote helps one find what they are looking for without toggling with the navigation bar.

The HDR technology allows the users to view HDR content via all sources. For audio, the TV also features Dolby Audio, Built-in Stereo Speaker and Smart Volume feature. The Smart Volume feature relieves the user from the hassle of adjusting the sound according to the content they are watching. This feature automatically adjusts the volume according to the content being played on the Television.

There’s also a sports mode that optimises the sound and image quality as per the sports that the user is watching.