Honor V40 spotted on Geekbench ahead of launch on January 18

Honor V40 will be powered by octa-core MediaTek Dimensity 1000+ processor clocked at 2.0Ghz.

Honor has already confirmed to launch Honor V40 5G smartphone in China on January 18. Now ahead of the launch, the Honor V40has been spotted on Geekbench website revealing its key specifications.

Honor V40 has appeared on GeekBench with model number Honor YOK-AN10. As per the GeekBench listing, the Honor V40 will be powered by octa-core MediaTek Dimensity 1000+ processor clocked at 2.0Ghz. In addition to the chipset, the Geekbench listing also confirms that the smartphone will feature 8GB of RAM. 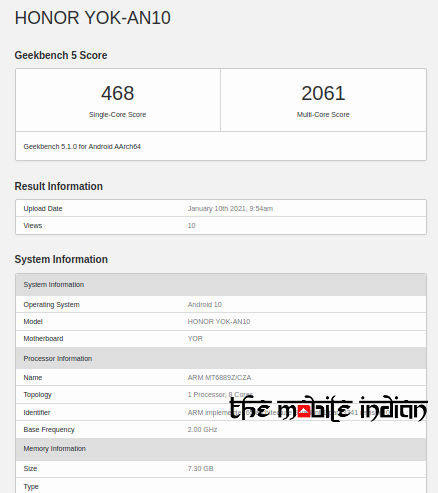 For the software, the Honor V40 will run Android 10 out of the box. On the benchmark site, the phone has scored 468 in the single-core test and 2061 in the multi-core test.

As per a recent Weibo post by the company, Honor V40 will come with a curved display. The shared teaser also revealed that the phone will come with dual punch-hole cameras.

Under the hood, the smartphone will be powered by MediaTek Dimensity 1000+ chipset coupled with 8 GB of LPDDR4x RAM and 128GB/256GB of UFS 2.1 storage.